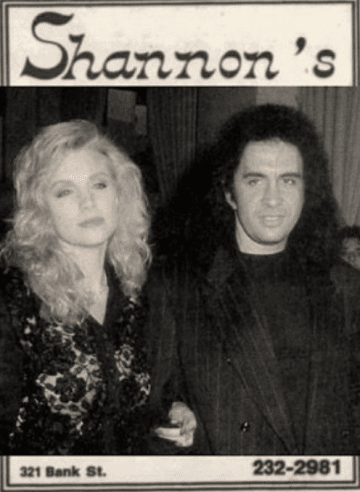 If you grew up *after* the 1980s, you may know Shannon Tweed only as the life partner of KISS‘ Gene Simmons (as portrayed on the hit TV show, ‘Family Jewels’). Anyone who grew up in the 1970s-80s (especially as a male) knows that Shannon Tweed was once Canada’s most famous sexy model-actress. In 1983, she and Gene Simmons began a romantic relationship, which would last for decades.

The future “Mrs. Gene Simmons” once owned a bar in Ottawa. And that bar morphed into one that would host a number of hard rock and metal shows in Ottawa.

After the aspiring model moved to Ottawa from Saskatchewan in the 1970s, Tweed became Miss Ottawa Valley in 1978, and then almost won Miss Canada. “I was quite well-known in Ottawa after that,” she said in her 1982 Playboy Playmate of the Year interview, “so I opened my own bar, called Shannon’s.”

Shannon’s launched at 321 Bank Street in 1979. Described as a “seedy little rock bar” by the Ottawa Citizen, it hosted music, but apparently nothing heavier than Rolling Stones cover bands. Shannon Tweed personally tended bar. But as 1980 arrived, Tweed moved to Toronto to further her modelling career. “Shannon’s” continued for a few months without her, but soon morphed into Hooper’s — which went on to host a number of heavy bands in Ottawa in the early 1980s. – RC“