In a recent interview with RollingStone, KISS bassist Gene Simmons got into some “trouble” publicly when he made some rather pointed comments when asked whether former Van Halen frontman David Lee Roth would still be the opening act on KISS‘ End of The Road World Tour. Simmons was quoted as saying: “Not. But it bears noting that during Dave’s heyday, nobody did what he did. He was the ultimate frontman. Not Plant, not Rod Stewart, nobody. He took being a frontman way 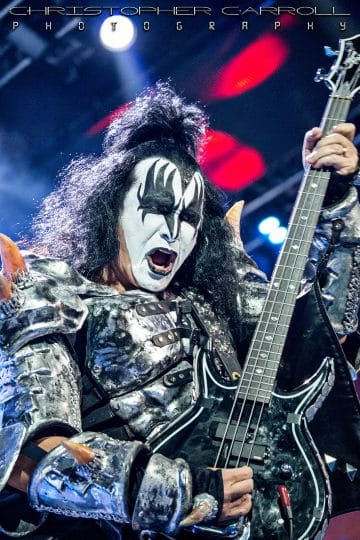 beyond anything. And then, I don’t know what happened to him… something. And you get modern-day Dave. I prefer to remember Elvis Presley in his prime. Sneering lips, back in Memphis, you know, doing all that. I don’t want to think of bloated naked Elvis on the bathroom floor.”

This apparently did not sit well with Roth who responded to Simmons by tweeting a photo on August 20th of a child giving the middle finger and sticking his tongue with the following words “Roth to Simmons” and by posting the photo 18 times on his Instagram account.

Simmons was subsequently interviewed by US Weekly and a video excerpt from the interview has Simmons apologizing for hurting Roth‘s feelings. Simmons stated to US Weekly (as transcribed by Sleaze Roxx):

The US Weekly reporter asked Simmons if perhaps Roth was upset because of how much he values Simmons given the latter producing the band’s demos back in the day. Simmons replied: “Nah. I don’t think anybody gives two shits about what I think and that’s the way it should be. Treat everybody sort of on an equal plane. This might get me in trouble too. Even the Pope poops every day. It’s kind of the humanity of it all. I’m not better than you. You’re not better than me and feelings [laughs], that includes the Pope who is a good guy and everything. Feelings are human and anybody can hurt your feelings. You can be the king of anything and a kid comes over, ‘Aaah, you stink’ in front of everybody else and it could hurt your feelings. So for that, I’m really sorry about that. I never meant to hurt his feelings but the way the words came out, I could see where that would be the impression — not my intention.”

You can listen to the video excerpt of the interview with Simmons by US Weekly below: