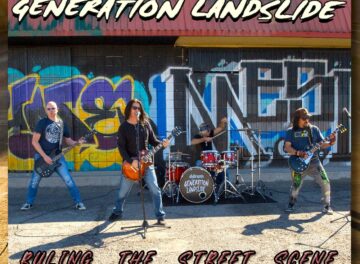 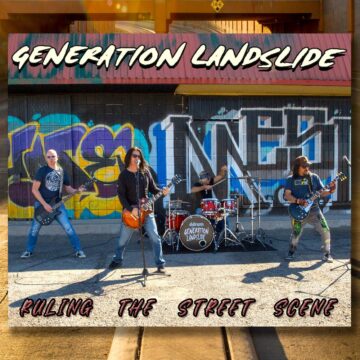 “Comprised of former members of both Cold Sweat and Lillian Axe, Las Vegas’ Generation Landslide may be a new band but some of the names might be familiar.

Generation Landslide‘s singer, lead guitarist and main songwriter may be known to you as the drummer for MCA Records artists Cold Sweat in the early 90s – or perhaps from the very first KISS tribute to actually be endorsed by the actual band themselves, Cold Gin, in which he was “Paul Stanley.” The band’s drummer, Ken Koudelka, was the drummer for Lillian Axe in the early 2000’s and the band is rounded out by guitarist Sandy Stein and bassist, Jonothan Swanson.

The quartet’s debut album, Ruling the Street Scene, is due for release on November 25th and was produced by the band’s frontman, Anthony White, and recorded at The Tone Factory in Las Vegas, Nevada, USA. The album is a whirlwind of 80s and early 90s influenced melodic rock, complete with ocean wide hooks, sing-a-long choruses and a “feel good” vibe that continues throughout the entire album. Kicking off with the ferocious “Little Miss Lonely”, White and company make it clear what they’re all about from the opening riff.

“The whole idea was to try and bring back all the elements of listening to an album from front to back that took you on some sort of a musical panache. I think it’s a combination of catchy riffs, catchy songs with a bit of a modern feel mixed in.” The album’s first single, “Feel The Sensation” is gang vocal heavy and tells the story of finishing your day job and feeling the anticipation of going wild from seeing your favorite band in concert that night from a spiritual way “Love And Pain” …comes from the ups and downs in every relationship and the emptiness of being alone and “Are You Out There?” is a tribute to the late Thin Lizzy bassist Phil Lynott. “I always felt he was an unsung tragedy,” says White.”