Gentlemen Of Distorted Sound Support The Quireboys On UK Tour 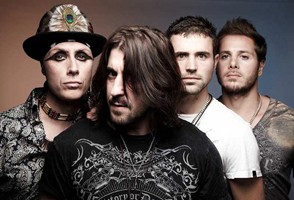 London based Gentlemen Of Distorted Sound are embarking on a full UK tour this winter which spans the length and breadth of the British Isles as support for British Rock ‘n’ Roll pioneers The Quireboys.

Forming five years ago, this mighty foursome deals in bluesy, classic rock that will put a smile back on your face and a swagger in your step. The band learned their trade playing everything from pop and soul to metal as they tried to find the missing link between the groove laden sound of 70’s classic rock and intense explosion of 90’s grunge. In these times of financial ruin, social strife and an uncertain future for us all rock ‘n’ roll remains something that most of us can rely on so bands like Gentlemen Of Distorted Sound are to be applauded and treasured.

Gentlemen Of Distorted Sound’s singer Gareth Nugent’s soaring, powerful, expressive and mesmerizing vocals run in the family — the Ted Nugent family that is! Gareth Nugent is a natural born front man, with the pipes you’d expect of a member of the Nugent clan, and never is this more evident than on the Gentlemen Of Distorted Sound’s debut offering, the 5 track ‘Bone Idol EP’, released on July 26th, 2010 through Bare Knuckle Recordings.

Gareth Nugent was born in Dublin into a musical family, many of whom were or are actors or members of Ireland’s top domestic bands. Encouraged into the limelight at an early age, he was something of a child actor/singer prodigy, and starred on RTE TV numerous times in his youth.

Gareth relocated to the bright lights of London in his early twenties, and auditioned for a role in Bill Kenwright’s ‘Elvis The Musical’ production on the off-chance. Much to his surprise, he was asked to be PJ Proby’s understudy, and a week later, took over the lead role, which he performed for almost two years.

But deep down Gareth’s heart has always been into classic hard rock ‘n’ roll, triggered by a connection to his illustrious American cousin; Ted Nugent’s mother emigrated from Ireland to the USA in the 1940’s, leaving behind her sister who gave birth to Gareth Nugent’s father, making Ted Gareth’s third cousin.

In 2006 Gareth turned his back on lucrative musicals and set off on a mission to hook up with like minded lovers of ‘classic hard rock with huge grooves’. By the end of that year he had formed the Gentlemen Of Distorted Sound with Mako on guitars, Lawrence Santi on bass and Russell Gilbrook on drums. Over the following months the band set about honing their sound down and writing songs based around Mako’s searing riffs and subtle guitar melodies and Gareth’s supersonic vocals. The intensity of rehearsals and songwriting then gave way to playing live as the band took their distinctive brand of groove laden hard rock out on the road, playing gigs and festivals around the UK, France and Scandinavia. When drummer Russell Gilbrook was made on offer he couldn’t refuse — to become Uriah Heep’s new sticksman — the three remaining G.O.D.S. took time out to find and recruit a similarly powerhouse drummer, and after months of searching, Richard Fordham was asked to become the fourth member of this 8 legged groove machine.

Gentlemen Of Distorted Sound then went into Beethoven Street Studios in London and recorded the bulk of the songs featured on their debut 5 track ‘Bone Idol’ EP, with Mark Williams (Biffy Clyro, Oceansize, Enter Shikari), who then mixed the hard driving, groove laden tracks at his Mirror Studios in Watford.