With Queensrÿche drummer Scott Rockenfield staying mum on his departure from the band, and both guitarist Michael Wilton and singer Todd La Torre being somewhat vague about Rockenfield‘s absence from the group, former Queensrÿche lead vocalist Geoff Tate is offering a different point of view. Queensrÿche released their latest studio album The Verdict earlier this year and La Torre handled the drum parts on the record rather than Rockenfield. 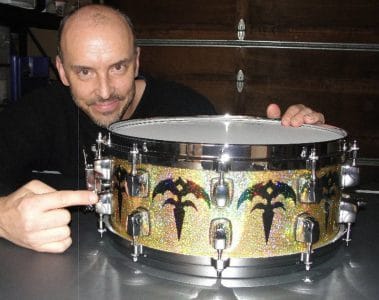 Tate was recently interviewed by Greg Schmitt for 88.1FM WESU‘s weekly syndicated radio show Noize In The Attic, and provided his perspective on Rockenfield‘s absence from the band.

Tate advised (as transcribed by Blabbermouth):

“Well, I can tell you that I’m pretty sure he didn’t leave on his own accord… I can tell you that there’s lawsuits involved; I know that… He’s in kind of a really dark place, and I hope he gets some help, ’cause he’s really unraveled, you know? In my opinion. It’s too bad — he’s an incredibly talented drummer, and unfortunately, he never was happy with that. It wasn’t good enough for him.”

In terms of whether he had spoken to Rockenfield since leaving Queensrÿche himself back in 2012, Tate indicated: “No, he won’t talk to me.”

You can read other excerpts from the interview with Geoff Tate by Greg Schmitt for 88.1FM WESU‘s weekly syndicated radio show Noize In The Attic, at Blabbermouth’s website.

In an interview with All That Shreds back in March 2019, Wilton opined that Rockenfield wanted to distance himself for a while without providing any details.

During an interview with Shred Shack in January 2019, La Torre advised (as transcribed by Blabbermouth): “Yeah, I played the drums on this record. Our original drummer, Scott [Rockenfield], he had a baby back in 2017, and he took paternity leave, and he’s still kind of been on that leave of absence. So we just continued to keep writing and doing things as a full band, like we’ve always done. He just wasn’t available for this one.”