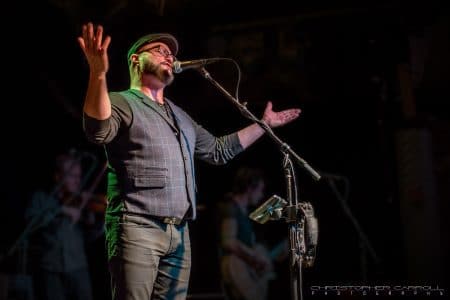 De Leaumont presumably jokingly asked Tate about the guitar on the stand that was left just in case ex-Queensrÿche band member Chris DeGarmo wanted to show up during Tate‘s current The Whole Ryche Story Acoustic Tour. Tate replied: “Well, Chris DeGarmo didn’t show up but John Moyer (Operation: Mindcrime bassist) did [laughs]. He joined us in Austin, TX for a few songs and that was really great. I think I’d be happy if Chris came by and said, “I’m here. Let’s go over a couple of songs.” Chris would never come out of the audience and just jump up there and play guitar. He’s not that kind of a guy. He would have to come early in the day, soundtrack, and run through the tracks, that kind of thing. That would be fun though.”

Tate was also asked whether he missed the connection between him and DeGarmo to which he stated: “Honestly, I’m just not that nostalgic about it really. Don, there’s just been so much water under the bridge so to speak but it’s hard to even find something about it that was pleasing to me. Even though it would be in my best interest to sit here in an interview and say, “Oh yeah. We were really great together. I miss that. I wish everybody would get back together and be all hunky dory again.” Honestly, I’m enjoying what I’m doing now. I like my life. Looking back on that period of my life with the band, there was so much stress all the time and so many personalities that didn’t click. We just tried to make it work for so long. Once you’re away from that scene and you’re breathing easily and your blood pressure goes down, you wonder, “Why in the hell did I put up with that for all those years?””

In terms of whether Tate‘s current The Whole Ryche Story Acoustic Tour will translate into a live CD/DVD, Tate stated: “… I don’t really have any solid plans of doing anything in my life [laughs]. I just kind of go with what feels right at the moment. We have recorded many shows of the tour and we’re going to be recording more and filming some as well. Perhaps in the future, something like that will be released. It just depends on how much energy it takes to complete everything and put it all together and whether or not focusing energy on that will take away from something else I’m looking forward to doing. I always have to balance that out.”

You can read the rest of the interview with Tate at The Great Southern Brainfart.