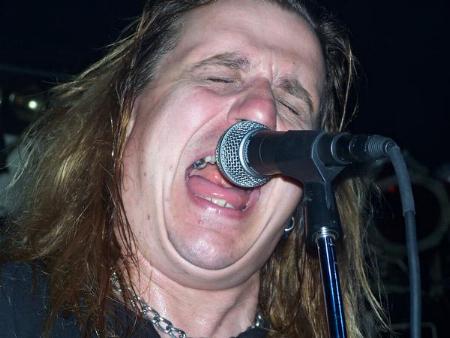 The following comments were made by Dolivo in that regard in a Facebook thread yesterday:

“No more Georg in Rhino Bucket. Our music, and music in general, has been so devalued that it is no longer sustainable for band like us. Others with survive, some will thrive, but for me it’s time to move on. Cheers, Georg“

It appears that Rhino Bucket will not be continuing without Dolivo as the band’s guitarist Brian Forsythe responded “no” on Facebook when asked whether there could be a Rhino Bucket without the long-time frontman.

Back in 2008, Sleaze Roxx interviewed Dolivo and asked him if he had any side projects. Dolivo responded: “I’m not, because Rhino Bucket pretty much takes up my whole life, as it always has. I’ve always toyed with the idea to do this or that or play with some other people. I did a thing while Rhino Bucket was on hiatus with Harry Cody from Shotgun Messiah. That was really fun. Reeve and Brian have another band called the Snakehandlers. 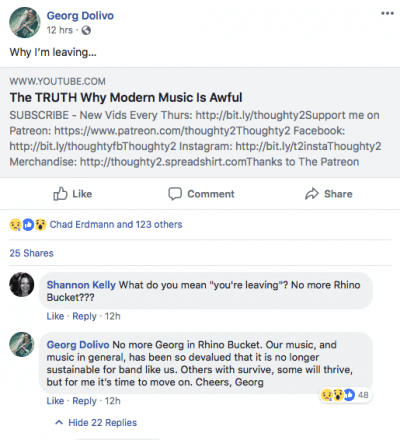 This guy named Bryson Jones, a good friend of mine, is the singer. They don’t seem to play a lot anymore. I’m like a one trick pony. The one trick is Rhino Bucket so I’m going to keep riding it.”

On whether it bothered him that other Rhino Bucket band members (such as Brian Forsythe in Kix) have other projects, Dolivo responded: “It used to. When it first started happening a long time ago it was like, ya know, let’s all get on board here. But I realize the sacrifices that these guys make on a daily, weekly, yearly, and lifetime basis to participate in the musical idea or vision that I have. It’s like if they want to go and take time to do something else to feel better about coming and hanging out with me that’s fine. It’s kind of like I’m in this band and I’m in this marriage. But it’s kind of like a swinger’s lifestyle. It’s all cool guys. Just make sure you’re here at my gig. A lot of times it’ll work to our advantage. They all go and do these other projects and go to these other places but when they come back they’re like, “God I’m glad to be back in the fold here. Let’s go rock out on some Rhino Bucket.” So it’s all good.”

Dolivo was also asked knowing what he does now about the music business, would he have done something different. The singer replied: “It’s all just a crap shoot. It’s all just Vegas. There are a lot of talented people. Any idea that is successful is always a great idea. But that idea is no different from the ideas that don’t work. It

really is gambling. I have to say the one thing I would’ve probably changed is not keeping the band going after Greg Fields decided to leave. We took a five year hiatus and I would have kept the band going. I think at that point we could have maintained a touring schedule with Supersuckers or Jackyl or someone like that. But the fact that we took a five year break and then about two more years to get an album out, maybe it was even longer than that. That hurt us as far as people being aware of us. But I was pretty burnt out at that point myself so…”

Sleaze Roxx also interviewed Dolivo in 2011 and asked him if he ever felt frustrated with the rock business at any specific time. Dolivo replied: “No. A lot of people have asked me that. We are a great band with nice guys — no one is jealous or anything like that. There are other bands out there, having more success than us, but I’m fine as long as there’s another gig tomorrow, another hotel I can rest in and someone who will give me a beer and a warm meal — I’m just okay, I’m happy! Nowadays I need a bit more sleep than way back then… now I need 3 days to recover when I’ve had too much beer. And now I drink only beer, not like back then when it was whatever was on the table like Vodka or Jack Daniels — I don’t do that anymore!”

Dolivo also posted the following YouTube video titled “The TRUTH Why Modern Music Is Awful” on why he is leaving the band:

Why is Modern Music so Awful?

Rhino Bucket‘s “Ride With Yourself” video:

Rhino Bucket – Ride With yourself