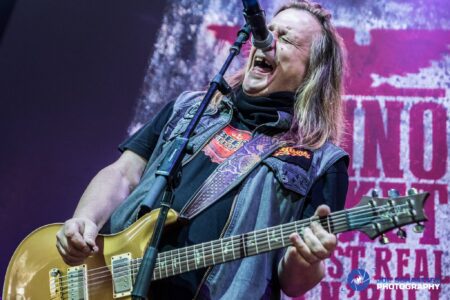 Back in early June 2018, Dolivo announced that he was leaving Rhino Bucket, which effectively put an end to the band. However, around May 2021, it was revealed that Rhino Bucket would be touring in Europe in early 2022.

In terms of what led him to leave Rhino Bucket in 2018, Dolivo indicated: “I just didn’t see a happy ending. The income streams were changing and thanks to this evil man who started to re-title everything for song placement, the amount of income was not enough to sustain the band.” With respect to what the future holds for Rhino Bucket, Dolivo revealed: “Ahhh. Well, I can tell you that the rumors are in fact true, and Rhino Bucket does in fact have a future. There will be a new album, a new European tour in 2023, and a new future ahead.”

On another topic, Dolivo shared what first kindled his interest in rock music. “I was born in Helsinki, Finland and my uncle had a TV variety show with three other guys that was the top-rated show for twenty years. Given that I grew up around him, there were always musical instruments laying about and an incredible music collection that was open for me to explore. My uncle was a “do it yourself” kind of guy, so when I approached him about doing music, he simply handed me a second-hand acoustic guitar and a The Beatles songbook and said, “Have at it.” From there, I learned to love The Beatles, and through the songbook, I learned how to structure a song. At that point, the floodgates had opened, and I was fully committed to playing music as my life choice.”

You can read the rest of the interview with Georg Dolivo at Vinyl Writer Music‘s website.