In terms of how he got in contact with West, Lynch indicated: “Well, I’ve known about Ray for a while because he was good friends with Oni [Logan], they kind of came up together. In the pre-Lynch Mob days in Florida, Oni and Ray had a lot of history, and they were kind of at the same level, but Oni hit a little harder than Ray did as far as making an impact and making a 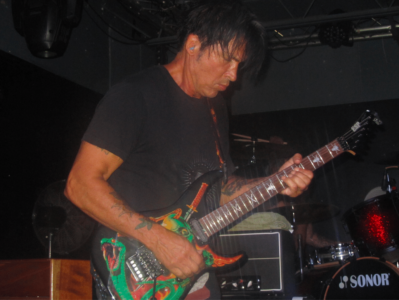 name for himself. But it’s really interesting because they’re kind of out of the same mold. So, with Ray, he is just a great fit for the band, you know? And so what happened was, Rob DeLuca has been in the band for a while as the bass player, so when we lost Andrew [Freeman] to Great White, Rob said, “Hey, you should check out Ray. And I hadn’t even thought of it, but Rob said, “Check him out, he might be a natural fit,” and so I did, and he really is. I mean, I probably couldn’t have designed a better fit in a laboratory.”

In regard to what West brings to the table, Lynch opined: “Well, you know, Lynch Mob has been a revolving door for sure. At this point, there have been more people that have been in this band than haven’t been in this band. [Laughs]. And so you know, it hasn’t always been the perfect guys that I would have liked to hand pick. It’s almost like, and I don’t want this to sound negative in any way, but it’s always been more of a matter of convenience at times, you know? It’s like this; when you get a different member of the band, be it a drummer, singer, bass player, or whatever – and this happens with a lot of people I’ve played with – it doesn’t always click. But I think what is a little different about Ray is that it’s like I’m putting myself back in time. You know, when we formed Lynch Mob initially back in ’89, the world was our oyster. We had worldwide tryouts and we really took our time because we wanted to just hit it hard right out of the box. Without all the hype and expectations, I think I have a little bit of a sense with Ray that he could have been that other guy instead of Oni, and that’s not to say there was anything wrong with Oni, it’s more a testament to Ray, that I think he could have easily been the guy back then. are all these different things, and stylistically, yeah, you might have a guy that’s just a monster machine, but he’s got no soul, and he lacks that thing that really fits with the legacy of the music. So, with all those things, for me, you have to put that all together, and again, I think with anybody else that has ever come through the door, toured, and done record, I’ve enjoyed every minute of that, and I appreciate everybody that I’ve played with. Through the years, it’s been a wonderful experience and adventure, but I think Ray is kind of like the cap on the end of the bookshelf.

I mean, of course, you never know, and I guess nothing’s forever, especially in this band. [Laughs]. We could be having this conversation again six months from now, and maybe the turnstile turned again, and we had to get a new guy. I am not anticipating that, but I’ve learned well enough that with this band, you just never know. But for the moment, I’m really appreciating the fact that we hooked up, and that we’re going to do this, and I’m very excited. I know Ray’s very excited too. He’s over the top and we are too, and I think that’s a little bit infectious. When you become a little bit older like me, it starts to become a little bit harder to get around. The result is it takes me a little bit more to get my motor going, so it’s kind of like, “Well, we’ve had thirty-five guys in this band. Okay, this is number thirty-six. Let’s see.” But, you know, I really am genuinely excited, and we’re always excited about having new guys and getting fresh blood. But this one is even more of an exceedingly animated thing for us because I think Ray is gonna bring some new life into our whole little world here. And we are planning on doing a record, we just signed up to do another album. It will be through Frontiers, and this will be my first official Electric Freedom record. I was actually thinking yesterday that maybe I should change it to Electric Eagle. [Laughs].”

Lynch was asked whether West would be doing a record with him to which he replied: “That’s the plan. I did get to start the initial process of sketching out some ideas, but all of the actual recording sessions are going to happen in August because of the tour schedule in July. But in August, we will have some time available to start that. I’d rather sit in a cool studio in August than be out on a freakin’ hot stage anyway. [Laughs].”

You can read the rest of the interview with George Lynch at Vinyl Writer Music‘s website.