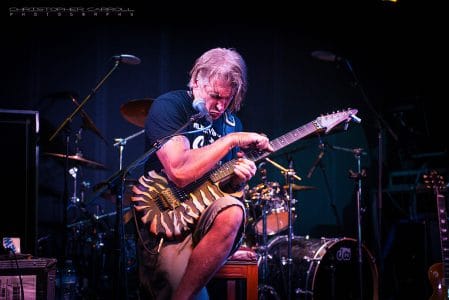 In terms of the overall message on The End Machine‘s latest album, Lynch indicated (with slight edits): “I have to answer that with a caveat. Jeff and I are aligned politically. We’re both very progressive in our political thinking and our, you know, little bit of activism that we try to participate in through our music. And, you know, I don’t know how effective that is probably not effective at all, but we feel compelled to try to try to do that because we feel it’s the right thing to do. Robert is not aligned with us politically and his messaging. So when we were writing the lyrics, of course there was a little bit of rub there, but we both, you know, we all respect each other enough to at least honor the idea of deducing truth from whatever it is we’re discussing. And we can have a difference of opinion on the results of that analysis, but we don’t have a difference of opinion about how we achieved that.”

Lynch continued: “You know, how we go about deciding if something is truthful or not? We’re able to have discussions that are civil and we can agree to disagree. And a lot of that has filtered down into some of the lyrics. So, I’m not saying that the lyrics are a hundred percent pure reflection of what I would consider to be the truth, but I made some compromises and I’m okay with that because that’s the world we live in. But I think generally the message is the same message. You would hear it from any progressive activist. And that is, it deals with the massive inequality injustice or environmental concerns. And you know, just the way we view ourselves as responsible animals and how we should behave. And I think it’s very logical and common sense. You know, this just seemed to have escaped us because common sense would dictate that we have to be responsible and do the right thing and, you know, wear a mask and not burn down our home and not poison our water and our air and treat each other respectfully.”

You can listen to the interview with George Lynch on the Pariah Burke of the Hard, Heavy & Hair Show at Pariah Rocks’ website.

The End Machine‘s “Blood And Money” video (from Phase2 album):