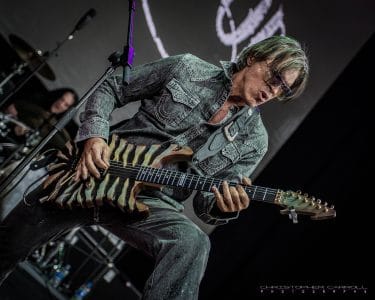 In terms of changing the band’s sound a little on Phase 2, Lynch indicated (with slight edits): “I think we started to recognize the challenge of doing what people expected like a smart corporation would. A company would say, “OK, well, why would we sell an obscure product that nobody wants? Why don’t we sell people what they want?” That’s always proven to be challenging for us because of all the styles of compositions that I do personally. I know for Jeff [Pilson] as well, because we talk about this a lot, the most challenging and the hardest thing for us to do is to recreate that ’80s chemistry and vibe in our writing. It’s really hard to do because either you’re copying it, which is cheesy, or you’re missing the mark and then you’re sounding like something else. What is this? It’s sort of nondescript.

Neither one of us has really had an experience where we went, “Oh, let’s try to put ourselves back in that mindset of you and I being in a room writing the Tooth And Nail record or the Under Lock And Key record. Let’s put ourselves back in that place”, even though every molecule in our body has changed, exchanged 100 times and we’ve got all these different life experiences and so forth, we’re not really those same people anymore. That’s really tricky and I feel that on some levels we’ve succeeded finally with this record. And you’d think that would be the easiest thing to do.”

With respect to his chemistry with Jeff Pilson, Lynch opined: “Well, we don’t have to go through the whole initial process that I have to go through with a lot of people, which is trying to vet each other out and sort of figure out how to work together and find common ground.  All those really triangulated aspects of the process, which is sort of behind the scenes and not really self-evident when you listen to music. With Jeff, it’s like an old married couple. Everything is sort of understood and we can finish each other’s sentences as related to the sounds we’re looking for on any of the instruments or what we’re trying to achieve sonically or arrangement-wise or stylistically what we’re trying to write. All those kinds of things, we’re on the same page so it makes communication way easier, we don’t have to spend energy on that.”

You can read the rest of the interview with George Lynch at MisplacedStraws‘ website.