Lynch Mob, KXM and Sweet & Lynch guitarist George Lynch was recently interviewed by Metal-Rules and asked about the history and creation of the new Lynch Mob track “Until The Sky Comes Down” from the upcoming new studio album The Brotherhood, which will be released via Rat Pak Records on September 8, 2017. 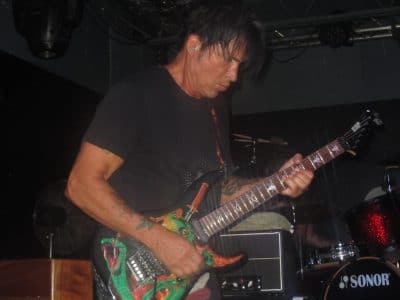 Lynch stated: “That’s an interesting one. I have to give full disclosure and admit something; that song is borrowed from something that you would never expect in a trillion years! I don’t think it was intentional as it was subconscious. It’s from a huge Lionel Richie song. I can’t recall the name of it. We are going to have to have a contest and who ever can name the Lionel Richie song will get a free trip to Hawaii or something [laughs].”

Lynch went on to add: “It was a huge hit. It’s a song everybody on the planet has heard 100s of times. Every part of “Until the Sky Comes Down” is borrowed from that Lionel Richie song. I should go figure out the name of the song.”

You can read the rest of the interview with Lynch at Metal-Rules.

Lynch Mob “Main Offender”/ Official video from their all new CD “The Brotherhood” available at: http://www.ratpakrecords.com/lynchmob or on iTunes http://sma…