Less than a month ago, German hard rockers, Snakebite, released their first video for the song “Road To Nowhere” from their latest album Princess Of Pain.

When Snakebite first formed, the band which included Wagner, Fischer and Lacroix recorded an album based on Sexx Action songs, but it was never released due to disagreements with a former Sexx Action member. Snakebite ended up composing new songs and released a limited demo EP via Maniac Attack Records, which sold out. 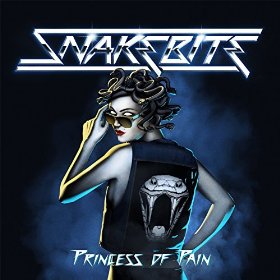 In the summer of 2014, a second guitar player, Gerloff, joined the band. Snakebite released a new album entitled Princess Of Pain in March 2015 via Maniac Attack Records. Princess Of Pain was recorded, mixed and mastered by Dennis Koehne (Sodom, Lacuna Coil, etc.) and Tom Kornis.

The band’s bio indicates that Snakebite “stands for authentic and timeless hard rock music, as this is what the charismatic guys truly believe in: no masquerade – no fake shit – no compromise! With a clear distance to comedy acts like Steel Panther and the current sleazerock-wave the four guys are bound to the music of the 70s and 80s, a time, when hardrock was predominant, but with no concessions to the outselling mainstream. Powerful riffs, rapid breaks/solos, combined with catchy melodies in straight compositions. Apart from the used sex, drugs and rock ’n‘ roll cliché, the boys represent a positive attitude and make a stand against standardized and slavish lifestyles.”