Swedish rockers Ghost have unveiled a video for their new single “Kiss The Go-Goat” which will be released as a limited edition seven-inch single on September 27, 2019 and will include one more song titled “Mary On The Cross.” 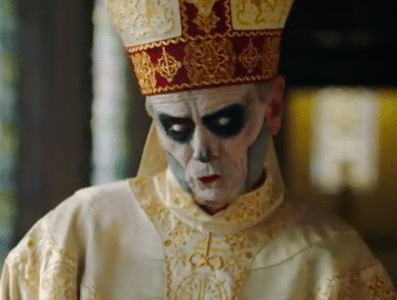 “The album contains three songs that purely capture the Crashdïet sound: “Rats,” “Faith” and “Dance Macabre.” “Rats” is a conventional rock single. “Faith” is a slightly heavier riff rocker and “Dance Macabre” is a bouncy tune driven by fantastic bass playing. Any of those three songs would fit into a Crashdïet playlist seamlessly, taking the visual aspect of the band out.

As far as the other tunes on the album, Ghost tends to fall more into the kind of balladry you’d find with contemporary power metal, though with a few interesting musical choices including the best saxophone solo I’ve heard on a release this year. The band’s lyrics are improved from previous efforts, but still play into the Black Sabbath “ooh isn’t Satan scary” schtick. While the previous Ghost albums aped much of their sound from the modern American indie scene, this album feels much more at home with the melodic rock and metal of their home nation of Sweden.”