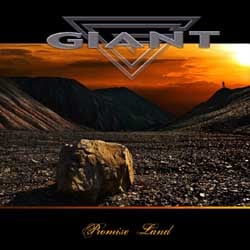 Frontiers Records to release GIANT’s come-back album “Promise Land” on February 26th in Europe and March 9th in the USA.

Formed by brothers Dann and David Huff, together with the experienced Jazz-Rock keyboardist Alan Pasqua and Nashville session bass player Mike Brignardello, Giant would soon become, with the release of their debut album “Last of The Runaways” (A&M Records, 1989), one of the most respected trademark bands of the Melodic Hard Rock scene. Following countless live performances, the band recorded the follow-up “Time to Burn” (Epic, 1991), an album still regarded as a main source of influence for many Melodic and Hard Rock bands nowadays.

With the sudden change of musical climate and after another World tour without Pasqua, Giant disbanded, with their members becoming involved again in different projects. Particularly Giant’s frontman and lead guitarist Dann Huff went on to become one of the most in-demand producers of our era, working in the Rock, Pop and Country Music with countless artists including Shania Twain, Megadeth, Faith Hill, Madonna and Bon Jovi.

In 2001, the Italian uprising Melodic Rock indie Frontiers Records, prompted Giant to release “III”, an album that would landmark the rise the new Melodic Rock scene, particularly in Europe.

Unfortunately Dann’s busy schedule along with the other members’ commitments, made the reunion impossible to carry on as planned. However the vision of bringing back Giant as a living band unit, with a recording and touring line-up and with of course the possibility to offer the enormous legacy of the music produced was developed, until it became apparent that Dann Huff could not be a full part of this concept, even though he loved everything that Giant was. Thus original members, drummer David Huff and bassist Mike Brignardello, started an endless research for the right musicians that could be part of a renewed Giant line-up. And in the end the choice fell on singer extraordinaire Terry Brock (Strangeways, Seventh Key) and John Roth (Winger) on guitars.

In April 2009 the band started the writing and the recording sessions of the new album, with Dann Huff himself participating to the sessions, co-writing with the new line-up members the haunting ballad Our Love and the straight out rockers Double Trouble, Plenty of Love, Save Me. He offered songs from his catalogue, such as the album title-track, Through My Eyes (both co-written with Mark Spiro) and Two Worlds. He also later guested on lead guitars on Save Me and Believer (Redux), the latter being a song written by Erik Martensson and Robert Sall of new Melodic Rock sensations W.E.T. with Miqael Persson (with two more: Never Surrender and Prisoner of Love fruit of the Martensson/Persson collaboration).

“We have worked so hard and we are very happy and proud of this record, along with Dann”, says David Huff and truly the production and band members songwriting and performances shine all over the album!