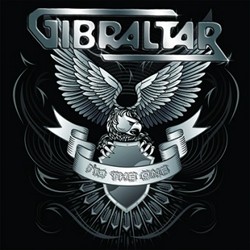 Gibraltar Releases ‘I’m The One’ Album After 25 Year Wait

Twenty-five years plus in the making, the super-rare album ‘I’m The One’ by hard rock band Gibraltar finally gets a well deserved official release from hard rock label FnA Records.

Passion. Energy. Intensity. Power. These are all words that can describe early ’80s hard rock band Gibraltar. However, if you look deep into its inner core, you will see that the aforementioned adjectives really stem from the nucleus — and that nucleus is lead singer Roy Cathey. Now it’s no secret that Roy Cathey is a powerhouse vocalist, but if it weren’t for the other members of Gibraltar, history may have very well been written differently for this Fayetteville, North Carolina hard rock quintet.

Gibraltar, which consisted of Roy Cathey on vocals, Frank Fournier on bass, Eric Page on guitars, Jerry Everly on drums, and David Garcia on keyboards, worked the Fayetteville scene hard. They took every gig that was offered to them, whether it was a club show, a keg party, the county fair (Fort Bragg), or even someone’s garage. Word started to spread and spread it did. The band’s fan base was growing rapidly with every new gig and the name Gibraltar was becoming well known amongst the early Gen Xer’s who were hungry for a new sound that would eventually define an era which gave life to a new phrase, ‘The Decline of the Western Civilization’. Quiet Riot, Van Halen, Def Leppard, Ratt and many others were seeing great success — and Gibraltar had the tools, including the look, to follow suit.

Perhap’s Gibraltar’s greatest strength was its live show. Cathey used his voice is a weapon, his heart as a shield, and his mind as a tool allowing him to bring the artist and the audience closer together. Well-written songs along with slick production and a decent budget garnered radio-friendly songs that the fans requested on a nightly basis. Local radio stations like WQSM and Q98 held “Rock Fights” on Friday nights where Gibraltar would routinely beat out not just the local competition but national acts as well.

Gibraltar’s climbing popularity created a buzz — and where there’s a buzz, there’s demand. Gibraltar took to the road, with raw intensity and no record label handing out tour support. The road was rough, but lucrative; audiences were won over and the band jettisoned across the country. The road is easy for some and a bitch for others. Eventually Jerry and David succumbed to the wears of the road and were replaced by Bevan Davies and Troy MacLawhorn. Tours came and went, and the years passed by without ever securing that major label record deal. A chance meeting while on the road with Marc Ferrari (formerly of the band Keel) led to an invitation for Cathey to join the band Ferrari. The acceptance of this invitation led to Cathey’s most documented time in the music business. Roy Cathey and Marc Ferrari would go on to form Sweatin’ Bullets which then became Cold Sweat. Cold Sweat was signed to MCA Records and released an album that contained two Roy Cathey co-writes (“Long Way Down” and “Killing Floor”) plus and an MTV music video for the song “Lets Make Love Tonight”. Cold Sweat would go on tour supporting their album “Breakout”, and then it was all over.

Roy Cathey and his cast of characters have seen the ups and downs, the coming and going, and the good and the bad of an industry that is constantly changing. Despite all of this, none of the guys would trade these times for the world.

In 2013, Gibraltar signed with heavy hitter hard-rock label FnA Records who repackaged the whole album with new artwork and a multi-page bio along with remastering the album. Early reports of advance copies that have been sent out have come back with rave reviews. One fan writes, “The packaging is very well done, the audio is the best I have ever heard for this album. Still sounds original, but remastered brilliantly. Don’t pass this up if you ever wanted this album in your collection. Money well spent.”

You can pick up the new album ‘I’m The One’ by Gibraltar from www.fnarecords and other fine music retailers around the globe (Amazon, CD Baby, etc.)