Former Guns N’ Roses guitarists, Gilby Clarke and Bumblefoot, were recently interviewed by LA Weekly to get their thoughts on the Guns N’ Roses reunion and what they are up to these days. 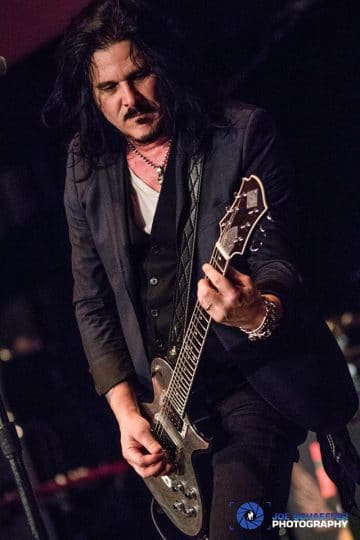 Clarke spoke about playing with some of the former Guns N’ Roses band members at the 2012 Rock and Roll Hall of Fame in Cleveland, Ohio, USA and not joining the rest of them for the induction ceremony as well as not being part of the Guns N’ Roses reunion tour that has taken place for the last year and a half.

The following are excerpts from the article / interview by LA Weekly:

Clarke became aware of the current Guns N’ Roses reunion along with everybody else, although he suspected something might be afoot when Duff McKagan began performing with Axl’s band a couple of years ago. He hoped that he would be the second choice after Izzy for the rhythm guitar spot, but he isn’t at all disgruntled with the way things turned out.

When Guns N’ Roses were inducted into the Rock and Roll Hall of Fame in 2012, Slash and Duff performed a short set of GNR songs with drummers Matt Sorum and Steven Adler, Clarke and vocalist Myles Kennedy, who performs with Slash’s solo band. Stradlin and Rose chose not to attend, but the event only cemented the idea that Clarke is the second-choice rhythm player in the minds of most when considering “classic” Guns N’ Roses. Sadly, even though Clarke performed at the ceremony, he wasn’t one of the members who actually got inducted into the Hall of Fame.

“From my point of view, I never really thought about it much, ever,” Clarke says. “I didn’t go through a process of pleading my case to be a part of the band. Not being inducted was definitely a bummer. To be a part of something and not be recognized for it. But deep down, I didn’t really care. It’s just another two lines on your Wikipedia page. Duff called me literally the day before and said, ‘We had a talk and we decided we’re going to play. We’d love for you to play with us.’ The only thing that was weird for me was when they went up to accept and I wasn’t there. I actually had to go somewhere else while they did that. That definitely felt weird.”

You can read the rest of the article / interview at LA Weekly.

A fantastic performance of Sweet Child O’ Mine, with Myles Kennedy on vocals.