Indian rockers Girish And The Chronicles consisting of frontman Girish Pradhan, lead guitarist Suraz Sun, bassist Yogesh Pradhan and drummer Nagen Mongrati have unleashed a video for their single “She’s Heavy Metal” from their sophomore album Rock The Highway, which was released via Lion Pride Music back on April 27, 2020. 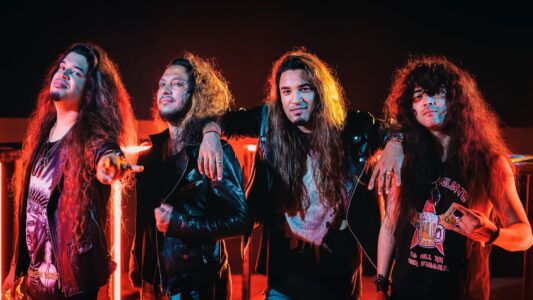 Photo courtesy of Girish And The Chronicles

Rock The Highway finished at #14 on the Sleaze Roxx Readers’ Top 20 Albums of 2020 to which Sleaze Roxx stated:

“As soon as I heard Girish And The Chronicles‘ single “Rock N’ Roll Is Here To Stay”, I reached out to the band’s frontman Girish Pradhan to interview him and find out more about the group also known simply as GATC. After all, how many great rock ‘n roll bands can you name that emanate from the world’s second biggest country in terms of population (second only behind China and really not far behind)? Girish And The Chronicles‘ second album Rock The Highway was almost like the revelation album of the year. Pradhan has a voice to die for and not surprisingly, has been involved in other projects including Firstborne, which features former White Lion bassist James Lomenzo and ex-Lamb of God drummer Chris Adler. Girish And The Chronicles recently signed with Italian record label Frontiers Music Srl for the release of their third album so one can only assume that this will bring more exposure to the band and perhaps be the catalyst for GATC to get to that next level.”