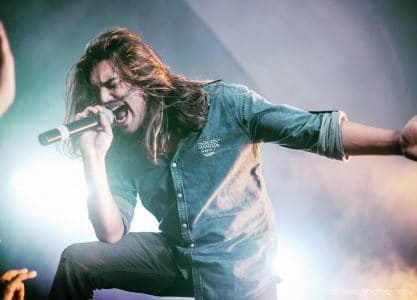 Lynch was asked what other projects that he has on tap besides Heavy Hitters 2 to which he replied: “I’ve been wrapping up three projects, and in 2023, I think I’ll have six or seven total releases, which is crazy to think about. I’ve nearly got the next Lynch Mob album done, we’re working on the next End Machine album, and finally, I’ve basically got the Banishment album wrapped up. The Banishment record will be released on March 23, 2023, on Frontiers Records, so we’re very excited. And I’ve got the next Ultraphonix record, the next Sweet & Lynch record, and another instrumental album on Ratpack Records called Guitars at the End of the World.

As for the Lynch Mob, we’ve got the new lineup set, and we’ve got my guitars, Jaron Gulino’s bass tracks, and Jimmy D’Anda’s drums all finished. We need to get Gabriel Colon’s vocals wrapped up and then go from there. The new lineup is really great, and I love what we’re doing. So, we’ll keep working on that with an eye to getting that out for 2023, too.

And then Jeff and I have been working intensely on the third End Machine record with our new singer, who is from India, Girish Pradhan, who is unbelievable. We loved Robert Mason, and he’s an incredible singer, but we felt it was time for a little bit of a change. So, of all the records I’m working on – and there’s a lot – I’m most excited about this next End Machine album. It’s really powerful, and some of the tracks are downright scary good.”

Pradhan is the lead vocalist for India based rockers Girish and The Chronicles, who have released the albums Back On Earth (2014), Rock The Highway (2020) and Hail To The Heroes (2022).

Girish and The Chronicles‘ “Primeval Desire” video (from Hail To The Heroes album):

The End Machine‘s “Blood And Money” video (from Phase2 album):