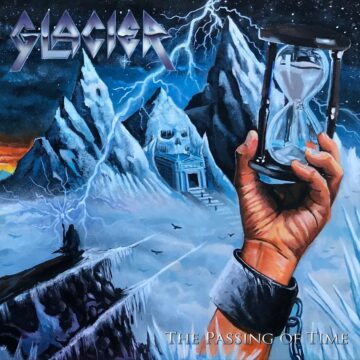 Glacier‘s website outlines their “history” as follows (with slight edits):

“The band Glacier was formed in 1979 by guitarist Sam Easley, with the name, suggested by fellow guitarist Patrick Goebel, derived from a street name at Black Butte Ranch in Oregon.  The band released a three song demo, Ready for Battle, in 1984 with the line-up consisting of Easley and Goebel on guitars, Tim Proctor on bass, Loren Bates on drums, and vocalist Michael Podrybau.

Then, in 1988, Glacier released a second demo that presented a significant line-up change, as it only included band-members Goebel and Bates from the original demo. The remaining band was comprised of Troy Ketsdever on bass, Mehdi Farjami on guitars, and session vocalist Tim Lachman. Two years later, in 1990, Glacier disbanded and became a distant legend in the chronicles of heavy metal… or so it seemed.

More than 30 years passed before Glacier began to rise again.  In 2015, on Christmas Day, three digital singles were released, to include “Sands of Time,” an instrumental rehearsal from 1985, “Vendetta,” a re-release of the original 1985 recording, and also a remastered version of “Vendetta” as well.  Sadly, nine months later, Sam Easley passed away.

In November of 2016, organizers of the Keep It True metal festival in Germany announced that the band Devil In Disguise, a Glacier tribute band led by former vocalist Michael Podrybau, and consisting of Alfonso Polo “Poncho” Cuevas on bass (and touring bassist Greg Bruchert), Michael Mendoza and Michael Maselbas on guitars, and drummer Adam Kopecky, would perform live at the sold out Keep It True XX in the spring of 2017.  Podrybau, backed by Bruchert, Mendoza, Maselbas, and Kopecky, played a full set of Glacier songs that had not been performed live in almost 32 years.

Receiving an abundance of positive accolades, Devil In Disguise continued to perform throughout 2017, playing Chicago’s Legions of Metal festival in May, and opening for Doro in mid-September. At this point in time, Devil In Disguise was comprised of Michael Maselbas, Michael Mendoza, Alfonso Cuevas, Adam Kopecky, and Michael Podrybau.

On January 8, 2018, with the approval of Glacier‘s surviving original band members, Devil In Disguise announced that they would recommence under the name Glacier. The line-up again changed with the departure of guitarist Michael Mendoza, who was replaced by Ryan Bruchert, and bassist Alfonso Cuevas, who was succeeded by Marco Martell.

In May of 2018, former original band member Tim Proctor, joining Maselbas, Martell, Bruchert, Kopecky, and Podrybau, made a guest appearance on stage during Glacier‘s set at Seattle’s NW Metal Fest. Later that month, Glacier traveled to Athens, Greece to perform at Up the Hammers XII, and in October the band visited fans in South America for the first time, playing at Jaguar Fest in Bogotá, Colombia. While Maselbas, Martell, Bruchert, Kopecky, and Podrybau made a phenomenal team, upon returning to the United States, Ryan Bruchert announced his departure from Glacier, and Marco Martell made a shift from bass to guitar.

In August of 2019, Glacier played Germany’s Trveheim Festival, and they performed in the Netherlands at the Heavy Metal Maniacs Festival in mid-September.  Later in October, the band headlined a mini tour of the Pacific Northwest with support from Riot City, Gatekeeper, Road Rash, Silver Talon, and Sölicitör. Other shows are currently in the planning stages. The band has also finished recording a new full length album, The Passing of Time, scheduled for an October 2020 release, so prepare yourself for the next onslaught from Glacier.”