Toronto, Canada glam metal band Amour have just released a new album entitled Say A Prayer For Rock And Roll and have made it available for streaming via their Soundcloud page. 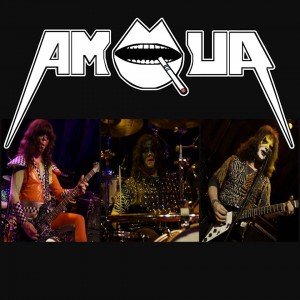 Amour describe themselves as follows on their Soundcloud and Facebook pages: “Amour is a 3 piece Classic, Glam Rock band from Toronto, ON. Canada, with theatrical presence in every performance. We are Canada’s Most Theatrical Rock & Roll band, with a unique look, and a vintage sound that will leave you wanting more after each performance.”

Sleaze Roxx stated the following in its concert review of Amour‘s gig when they opened for Ratt’s Juan Croucier back in September 2015: “I got inside the Rockpile at around the beginning of the last opening act called Amour who really should be paying royalties to KISS for all that they have borrowed from the iconic rockers. There were so many similarities between KISS and Amour, it wasn’t funny. The make-up, the clothes, the choreographed moves between the bassist and two guitarists, the bassist Rick Priest and one of the guitarists (presumably Mitch Knight) both handling lead vocals — the list goes on and on. Given that I have always been a big KISS fan, it was kind of cool seeing Amour playing as you could imagine KISS back in their early beginnings playing to a sparse crowd.”

Sleaze Roxx went on to state: “My favorite song from the theatrical based rockers was “Devil’s Daughter.” I also enjoyed Amour‘s theatrical end of things and all of their songs sounded pretty good on a first listen. The guitar solos in particular were quite enjoyable. Next time that I know that Amour is opening at a Toronto area show, I will make a point of being there for their set.”