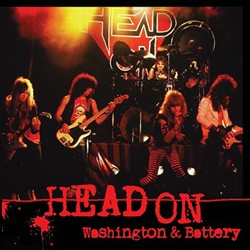 30 years in the making and the Godfather’s of the San Francisco glam rock scene have finally released their 12 song debut CD! Head On and Demon Doll Records have teamed up to bring you all the bands classic cuts on one disc – finally delivering sonic justice to the band that influenced so many.

‘Washington & Battery’ has been digitally re-mastered and restored. Every track completely encompasses the look and attitude that made the band so mesmerizing during their legendary run atop the San Francisco scene from 1981 to 1984. With songs like “Shoulda Known”, “Love Sick” and “Ready Go”, the band was often compared to such heavyweights as the New York Dolls and Aerosmith which only helped to cultivate a dominate following that carried them onto the cover of every local paper as well as being covered internationally in Kerrang! Magazine.

Their music was hot and their live shows legendary! After a night of opening for the Joe Perry project, Paul Stanley of Kiss was spotted meeting with the band, rumors began to circulate that Head On was being considered for an opening spot on the Creatures of the Night tour. Instead they landed opening slots for such bands as Ted Nugent, Cheap Trick, Y&T, Motorhead, Aldo Nova and Kix.

Records like this come along once every 30 years, so grab your copy today! This album is silver pressed, officially licensed from the band and exclusively available through Demon Doll Records at www.demondollrecords.com/head_on/head_on_washington__battery

In the words of guitarist Michael Raphael of Jailhouse: “As a kid, Head On influenced me more than probably any band on earth. Watching them play was no different to me than watching Tyler and Perry from Aerosmith or Mick and Keith from the Rolling Stones. Mark Burglund’s vocals and guitarist Frankie Wilsey’s charisma were off the charts!! From the solid bass lines of Rick Tweed, to contributing song writer/rhythm guitar player James Ray and the master of tricks behind the kit Howard Teman – I never knew who to watch! (I’ve seen Howard do things with his sticks I don’t think Tommy Lee could do.) This band needed to be heard by the world and I personally made sure that would happen. Head On ’til the end of time!”