Italian glam rockers 17 Crash‘s drummer Phil Hill was recently interviewed by The New Wave of Hair Metal‘s senior admin Tom and asked what are the band’s future plans to which he replied (with slight edits):

“We are still on fire! We’re working hard on our second album with our new label “Volcano Records“. There will be a new sound, a new look..can’t say more…you’ll see. This album as the first one will be 100% rock n’ roll but with a different approach as it was for “Reading Your Dirty Minds.” It will be more mature, modern, and it’ll sound very European.”

In terms of how the band began, Hill provided a detailed explanation as he stated (with slight edits):

17 Crash is a hard n’ glam rock band born 6 years ago in the city of Livorno (Tuscany). I created this band from nothing.
I was alone and kinda bored of all the musicians/scene of my area. I needed my own shit, something loud, wild and damn bitching. To do this properly, I first needed a kick ass singer/frontman and I tell ya, this is the most important/hardest aspect to start a new band as good as possible . After a long search I found my man, Mr. Ros Crash! A 100% power metal lover. A guy with a great voice, attitude, and in my same position…bored as fuck, and with one goal in mind.

Right after that I found another wild figure, perfect for what I had in my mind. I’m talkin’ about the one and only, Mr. Steve Poison! The dancing fucker, our irreplaceable six string guy!

Our three asses are still here after six years, and it feels so good, I tell ya. We’ve grown together as musicians, human beings, but most of all as friends. After months of rehearsing in 2012, we went to a studio. We recorded a demo with three songs “Let me live your rock n’ roll”, “Respect” and “Rock n’ roll”. 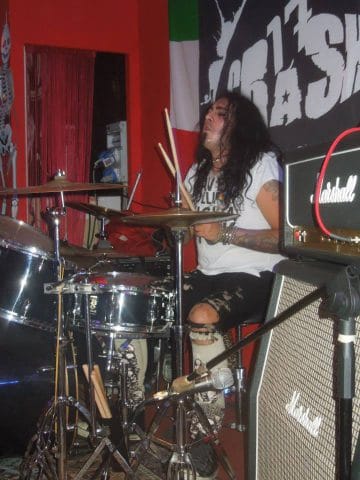 Then we started playin’ in local clubs to see what would happen. Then we began to play all around Italy. At the time we had just a bunch of songs and some old clothes but we didn’t care cuz we were on fire and hungry to show people our mood. So we collected more than 300 gigs in 4 years!

After some line up changes, one year ago, Frankie (the youngest member), joined us as the second guitarist. He’ s young, very talented, and has a great passion for music.

“Reading Your Dirty Minds” is our first studio album and it was released on October 30th, 2015. It’s pure hard n’ glam rock n’ roll. It’s straight to your face and describes us at 100%. We worked so hard to have it that way. This album is our biggest pride and joy. After the record was out we did a year and a half of touring to promote it. Always on the road, so many miles, faces, clubs and stories. More than 90 shows all around Italy from North to South. We also played gigs opening for major acts such as “Crazy Lixx“, “Adam Bomb“, “Geoff Tate” , “Girlschool“, and many more. Plus we had plenty of great festivals with big stages and crowds!

In 2014, we won the “Livorno Music Awards” and they put us in a book called “n fondo si suona” as one of the most important band of our region. Right after that, we got signed by the big American sleaze label “Demon Doll Records” that sells our CD in the USA, and Japan. Two singles/videos came from the album: “Let Me Live Your Rock N’ Roll ” and “Dirty Room” (Go find it on YouTube). We received so many good responses of our work from zines, papers, and media from all around the world.”

You can read the rest of the interview with Phil Hill at The New Wave of Hair Metal‘s Facebook page.

The new 17Crash’ s single ” Fat Love “. An extra track not included in their first album “Reading your dirty minds ” released on October 2015 under “Demon D…