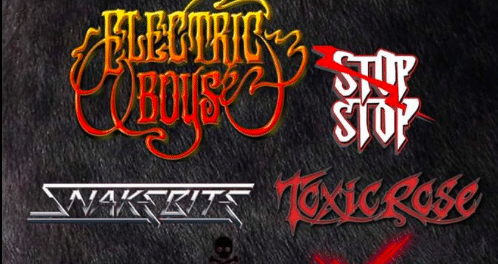 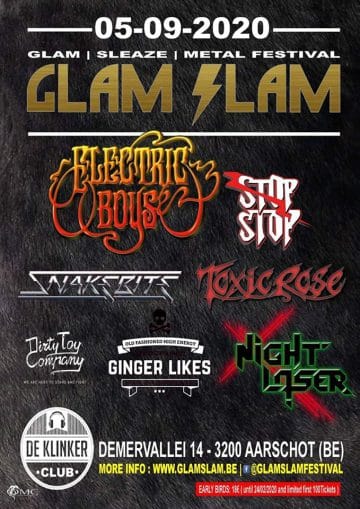 A new rock festival is upon us with the inaugural Glam Slam Festival, which will be taking place at the De Klinker Club in Aarschot, Belgium on September 5, 2020. The Glam Slam Festival bills itself as a “glam, sleaze, metal” festival and will include Electric Boys (Sweden), Stop Stop (Spain / Bulgaria), Snakebite (Germany), ToxicRose (Sweden), Dirty Toy Company (Belgium), Ginger Likes (Netherlands) and Night Laser (Germany). The event’s Facebook page indicates that there is an early bird special price of 18 Euros for the first 100 tickets that ends on January 24, 2020.

All of the aforementioned bands have been covered on Sleaze Roxx in the past with Snakebite being the most prominent one in terms of coverage with two interviews in October 2015 and June 2018, and their album Princess of Pain landing the #4 spot on the Sleaze Roxx’s Top Ten Albums of 2015. Snakebite have released three albums to date — Snakebite EP (2013), Princess of Pain (2015) and Rise of The Snake (2018) — and will be releasing their debut live album on January 24, 2020.

Sleaze Roxx stated the following in its review of Rise of The Snake: “Snakebite have done it again mastering the art of melodic rock with an edge. I lump the band in the same breath as such melodic rock (with an edge) heavyweights as Eclipse, H.E.A.T (especially with Tearing Down The Walls) and Kissin’ Dynamite (the latter based mostly on their latest album Ecstasy). I’d love to be able to catch a live show from these guys and hope that Rise Of The Snake is the album that catapults Snakebite to the next level such as an Eclipse or a H.E.A.T.”

Snakebite‘s live video “All Your Loving” video (from Rise of The Snake album):

SNAKEBITE – All Your Loving (live)

The Electric Boys, led by frontman Conny Bloom, date back to 1988 and they released their latest studio album titled The Ghost Ward Diaries back in November 2018. 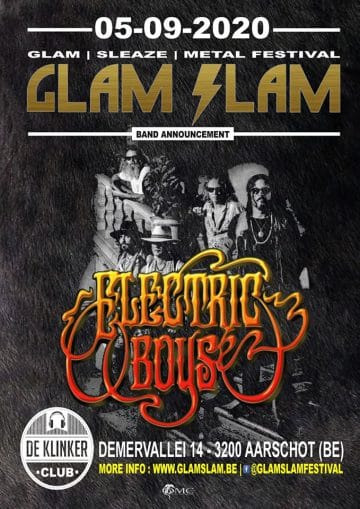 Wikipedia states the following in part about Electric Boys (with slight edits): “They were formed by Conny Bloom (real surname: Blomqvist) (guitar/vocals) and Andy Christell (bass). Originally a duo, they signed for Polygram and scored a local Swedish hit with the single “All Lips and Hips” in 1988, which according to some people is their best song so far. This early version of what would become perhaps the band’s best-known hit also appeared that same year in America on the soundtrack to the movie Feds. The band then added second guitarist Franco Santunione and drummer Niklas Sigevall.

In 1989, the band’s debut album Funk-O-Metal Carpet Ride, including a revamped version of “All Lips and Hips” was a success in Europe, and they picked up a strong following in Britain, where, as well as headlining small clubs, they supported Thunder…. The following year, the album was released in America, where they also became moderately successful, thanks to the singles “All Lips and Hips” and “Psychedelic Eyes”.

However, the follow-up album Groovus Maximus did not emerge until 1992, by which time grunge had swept all before it and the album was overall inferior to the debut. By the end of an American tour to promote it supporting Mr. Big, the band had lost Santunione and Sigevall and both North American and European record deals. Outgoing members were replaced by former Mogg drummer Thomas Broman and Martin Thomander (second guitar) and this line-up released the band’s third album, Freewheelin’ on the Music For Nations label in Britain. The album attracted little interest and the band dissolved. In 2005, founders Bloom and Christell joined Hanoi Rocks…. The band reformed in 2009 and released And Them Boys Done Swang in 2011.”

Swedish sleaze rockers ToxicRose have been very quiet for the last year and a half since the release of their single “The Fallen Ones.” However, the group announced last month that it has “some killer stuff” recorded and slated for release later this year.

Sleaze Roxx stated the following in its review of ToxicRose‘s debut full-length album Total Tranquility released back in May 2016: “With so many sleaze type bands seemingly retiring permanently (or temporarily) in the last year from the already mentioned Sister Sin to the iconic Mötley Crüe to the up and coming Dirty Passion, and others such as Crashdiet seemingly on an extended hiatus, it is simply fantastic to see a band grab the bull by its horns, take the mantle and run with it. Truth is, ToxicRose‘s new album Total Tranquility has more modern overtones than I would usually like but they do what they do so well that it has quickly rocketed as one of my favorite releases of the year. Although I find that the album tails off a little bit at the end starting with the ballad “Because Of You”, the first seven tracks are, song for song, pound for pound, really solid tracks.”

ToxicRose‘s “We All Fall Down” (from Total Tranquility album):

The official music video for the single “We All Fall Down”Taken from the album “Total Tranquility”Directed, filmed and edited by: Owe LingvallAnimations by: …