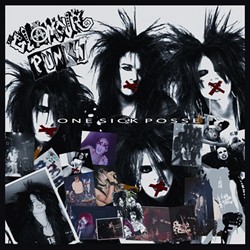 Glamour Punks Are ‘One Sick Posse’ On New Album

You wanted the sickest, nastiest, most deranged band to ever dominate the Sunset Strip — you got them! The Glamour Punks, arguably the best band to ever come off the strip in the early nineties, have finally teamed up with Demon Doll Records to bring you the record you have been waiting over twenty years to get your hands on — ‘One Sick Posse’.

This disc will blow your mind, as vocalist ManD and the boys have retracked the entire Hollywood classic for your listening pleasure, and it is downright ferocious on every level. The Punks are brimming with piss and vinegar and no one is getting out of this alive. Relive it, drink it, smoke it, cut it up and snort it, it is flat out addicting and guaranteed to make anyone within a 100 yard radius run for cover.

This CD is silver pressed, officially licensed from the band, and exclusively available at DemonDollRecords.com. There is also an alternate cover version of the record available that is a very limited edition pressing.

The album is dedicated to Dizzy Damage and Punk Rock Dave, and as the Glamour Punks might say, ‘Drink, puke, pass out, f**k, beat someone, buy this record, see us, start again!’

‘One Sick Posse’ track listing:
Day In The Death Of America
UFUCKU
Anti Social Child
Home Is Where You Hang Your Attitude
Video Nasty
Kick Her In the Head
Hated By Millions
Bad Attitudes
Reasons To Hate
Roach Motel
UFUCKU Again!!