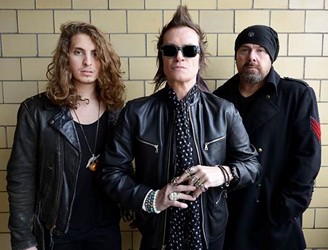 Think of California and you think of brilliant color and bright sunlight. Think of a breed and it’s all about bloodlines and brotherhood. Put the two together as California Breed, and you have the most exciting new band of 2014, built around the foundation of legendary vocalist-bassist Glenn Hughes, drummer extraordinaire Jason Bonham and 23 year old guitarist-singer-songwriter Andrew Watt. Mixing massive riffs, gutsy vocals and gale force rhythms, this powerful three-piece band will release their Dave Cobb produced debut album on May 16th in Europe and May 20th in North America on Frontiers Records as a CD and CD/DVD Deluxe Edition. The Deluxe Edition includes a bonus track called “Solo” and a DVD including two video clips (“The Way” and “Sweet Tea”) and a documentary.

California Breed was recorded at Cobb’s Nashville studio and features equal co-writing credits among the three-man lineup. “It’s proper rock,” Hughes told Classic Rock Magazine.com, “But at the same time it’s very now. Andrew is as influenced by Mick Ronson as he is Jimmy Page.” “This kid is amazing,” says Bonham. “The first time we met I thought he looked like the white Jimi Hendrix. And he plays in the studio likes he’s onstage!”

Glenn Hughes, ‘The Voice Of Rock’, is a true original, a legendary icon whose credits include Deep Purple and guesting with everyone from Black Sabbath to Earth, Wind & Fire — up to his most recent collaboration in the rock supergroup Black Country Communion. No other rock musician has carved such a distinctive style blending the finest elements of hard rock, soul and funk. That astonishing voice is Hughes’ calling card.

The legacy of Led Zeppelin lives on in Jason Bonham, British drummer and son of Zep’s legendary John Bonham. He has inherited the best of his father’s skills while mastering his own distinctive and dynamic technique. Jason has followed his own distinctive path over the years, fronting his own successful outfits like Bonham, and playing with Led Zeppelin, Foreigner, Heart and, most recently, movie composer Hans Zimmer.

Andrew Watt is a soulful singer/songwriter and multi-instrumentalist whose high-energy aggressive style and creative spirit are synonymous with New York City.

Hughes says, “I live in the moment, it’s all about NOW, California Breed is exactly where I live, breathe and where my freak flag flies.” Watch for future announcements on the band at www.californiabreed.com.