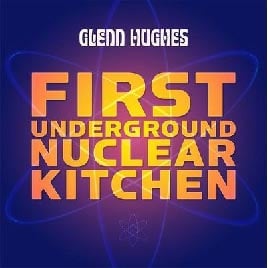 Frontiers Records is pleased to present all the details about the release of the highly anticipated GLENN HUGHES new album entitled “First Underground Nuclear Kitchen (F.U.N.K.)” on May 11th 2008.

Produced by Glenn in Los Angeles, after countless hours spent writing in his home studio, “F.U.N.K.” is another magnificent statement from the “Voice of Rock”. “It is a roots album, it is a true account of my musical heritage but also fearless and multi-dimensional”. Once again Glenn has reinvented himself and his art, being able to offer a new album which is truly emotional and picturing his own current way to speak the language of music.

“The beauty of makin’ music, for me”, explains the former Deep Purple and singer and bassist, “is to have a vast blank canvas. To completely open myself up to the universe and the spirits, that these days, live with me day and night. I am no longer in fear of the dark, or what lurks behind door number 13. The songs on my new album were written in, and around my Los Angeles home, sometimes in semi-consciousness… sometimes, in a dreamstate, sometimes fully alert, as I was in full jog down by the harbour… these new songs are a true vindication. And realization, of the gift of a serene life, one day at a time”.

The result is a brilliant balance of the diverse influences that have always been present in Glenn’s music, but with an incredible and very addictive mood that helps creating a feeling of joy and true enjoyment all over the album. “I believe that the hard work has been worth waitin’ 4, this is 4 all my fans, and beyond: a deep Musical Statement”, concludes Glenn.

Once again all drums on the record were played by none other than the great Chad Smith of the RED HOT CHILI PEPPERS, while Luis Maldonado took care of the majority of the guitars (JJ Marsh and George Nastos only appear on 2 songs each) and Anders Olinder is on keyboards (with Ed Roth guesting on 3 songs).

Final tracklisting of “F.U.N.K.” includes the following tracks (click on the song title to hear a sample):
Crave
First Underground Nuclear Kitchen
Satellite
Love Communion
We Shall Be Free
Imperfection
Never Say Never
We Go To War
Oil And Water
Too Late to Save the World
Where There’s A Will

Glenn has just finished shooting a promo video for the fist single “Love Communion” which will be included on the cd as special bonus: stay tuned for an exclusive preview on Youtube soon !His forthcoming World tour has also been announced, with the following dates: