Black Country Communion and rumoured The Dead Daisies frontman Glenn Hughes was interviewed by Tony Heare of Midlands Metalheads Radio at the Stonedeaf Festival in Coddington, UK that took place on August 24 and 25, 2019.

With respect to Deep Purple, Hughes indicated (as transcribed by Blabbermouth): 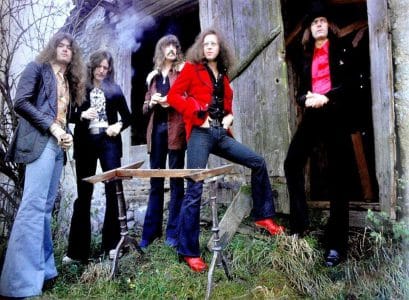 “I saw them at Wolverhampton Civic, as my manager in Trapeze, Tony Perry, was the executive [in charge] at the Civic Hall Wolverhampton. I saw them on the ‘Highway Star’ album, ‘Machine Head’. I hadn’t really heard them at all, because I’d been living in America since the early ’70s, so I missed ‘Fireball’ and a couple of other records. I saw them live, and they were in the full flow of ‘Smoke On The Water’ and ‘Highway Star’. I was very impressed with what I saw. I saw [Ritchie] Blackmore doing his thing. I saw a very cool band [and a] great musician. That was my first memory. The only things I heard from Deep Purple living basically on the road in America — I’ve never been, really, a guy to listen to radio — was ‘Highway Star’ and ‘Hush’ and ‘Smoke On The Water’. Those three songs were mega, mega songs… They were asking me [to join] for a year, kind of flirting with me, all the way through ’72-’73. [They] wanted to meet with me, and I met with them three times each individually, and then in April of ’73, I was playing in Baltimore, Maryland, and I had two days free. They were playing in those days at [New York City’s] Madison Square Garden. Jon [Lord] called me up and said, ‘You want to have dinner tomorrow night? We’re playing here. After the show, we can go out.’ I saw them play, and it was incredible. They were on fire.

The next day, I’m sitting with Jon Lord, Ian Paice and Ritchie Blackmore. There’s no Ian Gillan; there’s no Roger Glover. I didn’t know what was going on, and their lawyer and two managers, after about half an hour, said, ‘We’d like you to join the band.’ I said, ‘Me?’ I said, ‘Great.’ [Then they said,] ‘But we want you to play bass.’ The next second thought was, ‘What? Surely you’d like me to sing also.’ Ritchie said, ‘We want to find another singer so it can be two singers’… They wanted somebody to play bass who could sing, and a new [member] who didn’t sound and look like Gillan… The band announced to me that the singer they were going to ask and wanted was Paul Rodgers, my dear friend. The second they said Paul Rodgers, a little voice said to me, ‘Imagine him and I singing some songs together. Okay, I think I’ll join.’ Of course, three days later, when the word went out that I’d joined the band, Paul had started Bad Company, so what was I to do?

I made friends with Ian Paice. I actually moved into his house in London. That’s where it started, and after about six and seven weeks, we started to receive reels and reels — maybe five or six hundred — until one day, we found a guy from the Northeast [who] sent a Righteous Brothers song. Ritchie went, ‘Hang on a minute. This doesn’t sound like anything we’ve heard before’… We invited David Coverdale to come down on the train. David came down with a bottle of Bell’s whisky to play with us. He was a little bit legless, and we started to jam with him. Then Ritchie, Jon and Ian went for lunch, and I said to David, ‘Why don’t we stay here? We’ll go to the piano, we’ll do something quiet [and] we’ll see how our voices mend together.’ The great and glorious thing about that was his voice was deeper and wider, and mine was bright and, you know, the Glenn thing. What most people don’t realize is we had the same vibrato — the same exact vibrato, to the point of injury. When they came back, we played them what we had come up with, and that was a big part of him getting the gig. I love him — I’ve always loved him, and I always will. I’m so glad he got that gig. He deserved it.”

You can read other excerpts from the interview at Blabbermouth‘s website or listen to the interview by Midlands Metalhead Radio below: