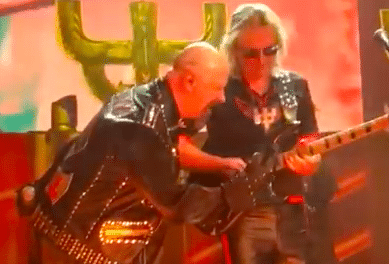 A little more than a month after making the announcement that he would not be joining Judas Priest on their latest tour dubbed Firepower due to complications with Parkinson’s Disease, Tipton was back on stage with the heavy metal veteran band for its last three songs at its concert at the Prudential Center in Newark, New Jersey, USA on March 20, 2018. Judas Priest with Tipton ended up closing the evening by playing a trio of songs from their 1980 album British Steel — “Metal Gods,” “Breaking The Law” and “Living After Midnight.” 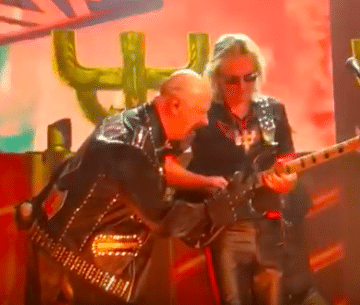 “Ten years ago Glenn was diagnosed to have the onset of the early stages of Parkinson’s – from then until recently Glennhas lived his life as the great heavy metal guitar player he has always been, maintaining by his own definition a standard of quality and performance that is incredibly important.

“I want everyone to know that it’s vital that the Judas Priest tour go ahead and that I am not leaving the band – it’s simply that my role has changed.

I don’t rule out the chance to go on stage as and when I feel able to blast out some Priest! So at some point in the not too distant future I’m really looking forward to seeing all of our wonderful metal maniacs once again””

Sleaze Roxx stated the following in its review of Judas Priest‘s new studio album Firepower: “There is much talk about Glenn Tipton’s departure from Judas Priest‘s current world tour, and I get that people want to see the original players on stage. This album seems to be Glenn’s final swan-song, and thanks to him for the decades of music he helped create. Regardless, don’t let the negative media prevent you from enjoying the new Judas Priest album Firepower.”

Glenn joined the band for an encore of Metal Gods on March 20th at the Prudential Center in Newark, NJ.