A few days ago, it was announced that Judas Priest‘s 70 year old guitarist Glenn Tipton was suffering from Parkinson’s Disease and would be unable to embark on the band’s upcoming tour in support of the new upcoming studio album Firepower. 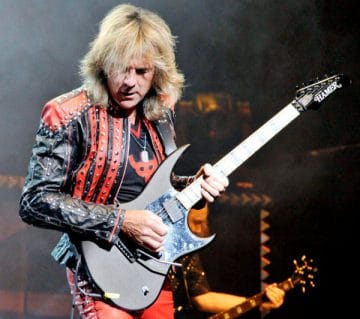 Judas Priest‘s bandmate and bassist Ian Hill opened up to Team Rock about the situation including that when they were rehearsing for their Redeemer Of Souls tour four years ago, Tipton had a tough time. Hill advised: “When he started then, he was shaky, but, as we went through, he was getting better every day…. At the end of the second week, he was ready to go. He put in a superb performance on the last tour, and we were all hoping that was going to happen again. But after the first week, it was obvious to all of us that it wasn’t getting any better…. But Glenn being Glenn, he’s nothing if he’s not a scrapper. He will fight tooth and nail to make it happen and in the middle of last week, in the middle of rehearsals, he had to admit it. We were all hearing this and we were living it with him. We felt every note…. He came in and he made the bravest decision anybody will ever make, saying, ‘I can’t do it any more.’ There wasn’t a dry eye in the control room where we were sitting at the time.”

Hill went on to say: “It’s not like he’s been stupid and fell off his motorbike or got whacked out on some drug – it’s not a stupid decision he’s made, he just can’t do it. He said, ‘Guys, my brain is telling my hands to do something and they’re not doing it’ and he had to admit that to himself as well as us.”

Hill confirmed that Judas Priest will be taking Tipton’s equipment on the road with them so he can join them onstage for some songs, and he also added: “When he was doing the album he was fine – he was okay for 10 minutes or so to run through a song. But standing there for two hours and after a while you can see he’s got no stamina there.”

You can read the rest of the interview with Hill at Team Rock.