GloryHammer release video for “Rise Of The Chaos Wizards”

Melodic power metal band GloryHammer have just released a video for the track “Rise Of The Chaos Wizards” from their upcoming album Space 1992: Rise of the Chaos Wizards, which will be released on September 25, 2015 via Napalm Records. The album is available for pre-order via iTunes, Amazon and the Napalm Records webstore. 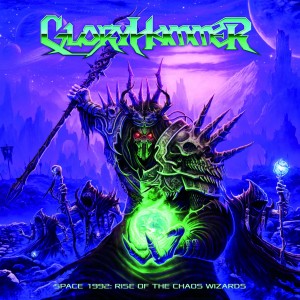 GloryHammer‘s Facebook bio states (with slight edits): “In the distant future of the year 1992…war has returned to the galaxy. One thousand years have passed since the brave hero Angus McFife defeated the evil sorcerer Zargothrax in the battle of Dunfermline, trapping the wizard in a frozen prison of liquid ice. But now, a cult of unholy chaos wizards are plotting to release their dark master from his ice-bound tomb and once again unleash the sorcerer Zargothrax upon the universe. The tragic destiny of the Galactic Empire of Fife now hangs in the balance once more…

And lo! The heroic fantasy power metal warriors GloryHammer have returned in 2015 with the follow up to their critically acclaimed debut album Tales from the Kingdom of Fife! Led by Christopher Bowes of pirate metal legends Alestorm, the new album from GloryHammer entitled Space 1992: Rise of the Chaos Wizards catapults the listener at warp speed into the distant future, with epic power metal tales of intergalactic warfare and transdimensional conquest in outer space. Expect more orchestral bombast, more cosmic soundscapes, more terrifying narration, and more epic battles than you’ve ever heard before!”

Track List for Space 1992: Rise of the Chaos Wizards:
01. Infernus Ad Astra
02. Rise Of The Chaos Wizards
03. Legend Of The Astral Hammer
04. Goblin King Of The Darkstorm Galaxy
05. The Hollywood Hootsman
06. Victorious Eagle Warfare
07. Questlords Of Inverness, Ride To The Galactic Fortress!
08. Universe On Fire
09. Heroes (Of Dundee)
10. Apocalypse 1992