Nebraska, USA based glam metal rockers 3D In Your Face have released a video for their song “Baptized By The Radio” from their latest studio album Lost In The Volume, which was released on May 20, 2016. 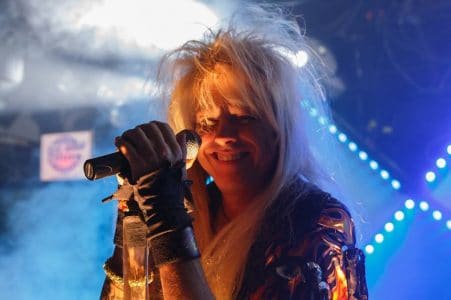 3D In Your Face‘s Bio on their Facebook page states:

“To know 3D In Your Face is to know the decade of decadence; the time when neon ruled, spandex reigned and hair triumphed. It was a magnificent age—loud and proud—when the idea of your entire music collection fitting into your pocket was unfathomable and you’d never think of confining the music to your head with a flimsy set of earbuds.

You can’t go back to rocking out to your favorite records, blowing out your stereo speakers and driving the neighbors crazy. But you can feel the awesome, awesome noise again with 3D In Your Face! Four guys in astoundingly loud coats, outrageous eyeshadow, ripped t-shirts and formidable hair are blasting the music way out of your parents’ basement and rocking the stage with a spectacle of showmanship better than any MTV video back in its heyday.

3D In Your Face is Alan “Hot Rod” King (vocals, guitar, keys), Chris “Sniper” Hineline (vocals, lead guitar), Mark “The Storm” Mefford (drums), and Sam “Spade” Morris (vocals, bass). The Omaha-based foursome doesn’t merely mimic metal gods. They fuse amazing musicianship with a spectacular stage show of laser lights, scissor kicks, spinning, and even rope-swinging to create a live concert event that channels gusto and testosterone into a one-of-a-kind experience that keeps you wondering what is going to happen next!

Smoke machines, choreographed guitar raising, a battalion of amps that threaten to outnumber even a large crowd, and over-the-top stage get-ups are just a piece of what this band brings to the floor. 3D In Your Face gets into the music, gets the crowd stoked, and makes the audience jump onto their marvelous ride.”

3D In Your Face‘s “Baptized By The Radio” video:

3D In Your Face -“Baptized By The Radio” (Official Video)

“Baptized By The Radio” is the second single from the latest 3D In Your Face album Lost In The Volume released on May 20th 2016. Directed by Sam SpadeVideo …

This the official music video for the third single “Forbidden City”, taken from the album Midnight Devils 2013. iTunes – https://itunes.apple.com/us/album/m…