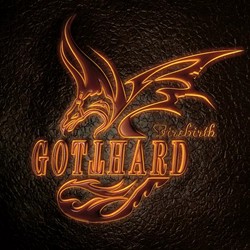 The cover artwork and track listing have been revealed for the new Gotthard album ‘Firebirth’, being released on June 1st by Nuclear Blast/Warner Music (Musikvertrieb in Switzerland).

A total of 13 songs will be on the CD, among them one with the title “Where Are You”, which is dedicated to orginial Gotthard singer Steve Lee. In the past few days, in the band-owned Yellow House Studios in Ticino, music journalists from all over Europe were able to listen to the songs for the first time — and are euphoric about them.

“Gotthard is recalling their roots”, is the opinion of the German magazine Rock Hard, “Earthy hard rock, heavy on riffs, with first class refrains and only a small amount of keyboards. A strong sign of life from the Swiss.” And the Italian Rock Hard supplements, “Gotthard is going back to their roots and at the same time looking to the future. The entire album makes you tap your feet to the rhythm and your heart beat loudly.” The German Rock It magazine says, “More screaming guitars, less keyboard — the hard gods have returned ‘Back to the Roots’.”

In actual fact, the album — earthy, rocking and played with a great deal of enjoyment — goes back to the old strengths of the band. “We have remembered our roots and deliberately given the album the pure straightforward Gotthard sound. Our goal was to concentrate on the most important thing — the songs,” explained Leo Leoni, who produced the album together with Paul Lani.

As well as in the regular CD, ‘Firebirth’ will feature in a specially presented limited edition. The album cover depicts the firebird Phoenix, which symbolically rises “from the ashes to the sky” — this line expresses what each Gotthard fan feels and underlines the turbulent time that Gotthard has gone through in the past months. Anyone wanting to see the cover artwork as soon as possible have to prove their skills — from now on you can puzzle together the artwork at http://media.nuclearblast.de/download/puzzle.html. As a firebird Phoenix coming out of the ashes has surely been an event with a certain impact, this cover artwork cannot just be presented to you normally.

It will be in Latin America that Gotthard experiences their baptism of fire — the world tour starts there in May, before the band headlines several important European festivals. The band starts the German live premiere as co-headliner at the “Bang Your Head” festival in Balingen. An important headline tour around the halls of Europe is already planned for autumn.