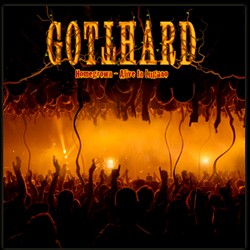 Gotthard Get Ready To Release ‘Homegrown – Alive In Lugano’

Gotthard will release the long-since announced and wishfully anticipated live album entitled ‘Homegrown – Alive In Lugano’ on September 30th via the Musikvertrieb (Switzerland) and Nuclear Blast/Warner Music (rest of the world).

‘Homegrown – Alive In Lugano’ contains a live recording of the band’s concert on July 17th, 2010 in Lugano, which was one of the last concerts with vocalist Steve Lee, who tragically died during a motorbike trip through the USA on October 5th 2010 in a not-at-fault accident. Due to the sudden accidental death of Steve Lee, the CD’s release was postponed.

“Lugano was where it all began and so the circle of all that we’ve experienced with our friend Steve Lee is completed right there”, comments bassist Marc Lynn. “The memories of the past 20 years on stage with Steve are being brought to life intensively with this album once again. They reflect the memorable time that we were able to enjoy on the Mount Olympus of Rock’n’Roll.”

The concert in Lugano took place in the course of the local HOG Ralley, a big annual event organized by Harley Davidson bikers. This gig in Lugano meant a lot to Gotthard. Being able to play for the Harley-clique in their hometown was an unforgettable experience.

All of the musicians of Gotthard are enthusiastic Harley-Davidson bikers themselves and perform for the purposes of respective events on every occasion or take part in rallies. Besides, “Homegrown” was one of the very few concerts that Gotthard played in their hometown Lugano.

“Steve was warmer and more cheerful than he had been in a long time”, guitarist Freddy Scherer remembers. “The chemistry between him and the audience couldn’t have been more intense, despite the fact that there were more than 20,000 people standing on the piazza. Fortunately we’ve recorded this memorable concert, for it unfortunately was one of the last ones with Steve.”

“And all that though the gig was on the rocks for some time at that evening”, drummer Hena Habegger recollects. “Shortly before we were supposed to go on stage, we got caught in a thunderstorm and the whole equipment got soaked. However, we didn’t give up hope and finally got our start signal just before midnight.”

The “home match” in Lugano includes several spectacular bonus materials, among others — as an absolute highlight — one yet unreleased song entitled “The Train”, which Gotthard recorded “live in the studio” together with Steve and which didn’t appear on any record so far.

The additionally enclosed bonus DVD shows chosen recordings of another historical concert of Gotthard: On the 31st of December 1999, the rock group played a gig over the course of the millennium — which also took place on the local piazza in Lugano and can be seen as one of the band’s most exceptional shows to date.

“Music let us travel ’round the whole world together within the last 20 years”, guitarist Leo Leoni summarizes. “In doing so, we’ve shared lots of unforgettable moments that rank among the most beautiful ones of our lives. Anyhow, returning to Lugano has always been something special. It’s the place we belong to and in which we are deeply ingrained.”

Apart from the bonus material, the DVD also contains interviews with the bandmembers remaining, which makes ‘Homegrown – Alive In Lugano’ a matchless memento.

‘Homegrown – Alive In Lugano’ will be released in remembrance of the first anniversary of Steve’s death and reminds of the world’s greatest rock vocalist in an extremely personal way. The CD will solely be released in an upmarket high-end Digipak-edition, to do justice to the special legacy that Steve Lee bequeathed to this world. It will be published on the 30th of September via the Musikvertrieb (Switzerland) and Nuclear Blast/Warner Music (rest of the world).

The album’s artwork captures the overwhelming emotions which always connected Gotthard with their hometown Lugano in atmospheric live pictures and shows the strong bond with their faithful fans. ‘Homegrown – Alive In Lugano’ marks the end of an era for Gotthard. Currently, the band is searching for a new singer and will turn over a new leaf in the band’s history soon…