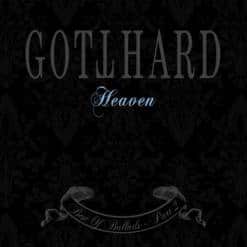 “Heaven – Best Of Ballads Part II” represents the most successful era of a band that has been together in the same line-up since the late 80s and which would only be split by death when singer Steve Lee tragically died on October 5, 2010 while on a motorcycle trip near Las Vegas. It stands for eight years of band history in which GOTTHARD had their big international break-through and were awarded diamond status for more than one million copies sold in their home country. No other band is such a symbol for Swiss music history as GOTTHARD.

“Nobody’s really in the mood for a driving rock song at the moment.” states bass player Marc Lynn. “This ballad compilation might also help our fans to cope with their sadness and grief.”

“We lost not only one of the best rock voices of the world, we also lost a really exceptional person, friend, brother and musician.” states drummer Hena Habegger. “Despite his tremendous success, Steve Lee always had his feet on the ground and never lost his sensitivity for the environment.”

The compilation will only be issued as a simple but very elegant all black digibook version and will include 2 previousley unreleased acoustic versions of the songs “Have A Little Faith” and “Falling” as well as a brand new track called “What I Am”.