Swedish melodic rockers Grand Design will be releasing their new studio album Viva La Paradise on April 20, 2018, which can be pre-ordered on the group’s Bandcamp page. 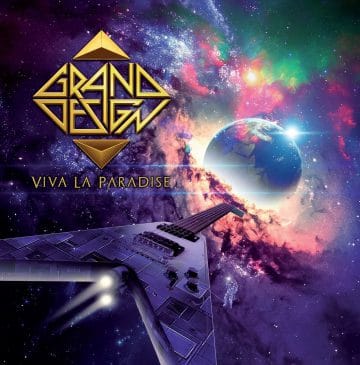 Grand Design‘s “Biography” on their Facebook page states in part (with slight edits):

“…Grand Design from Västerås, some 100 kilometer west of Stockholm, is the life of the party for all true AOR-fans: they got the songs with both power and melodies, breathtaking hooks and choruses so big that there..s no way of resisting them. The sound and the production is a wall of sound; a layer-on-layer affair signed Pelle Saether, and it most certainly sounds like he..s a disciple of the genious Mutt Lange.

“We wanted that Def Leppard sound to it. You know: 96 channels of choirs just running you over and we nailed it”, says Pelle Saether when asked to sum up the work with the album. The comparisons with the genres giants Def Leppard doesn’t bother him, quite the contrary. “Def Leppard are my Gods of rock..n..roll. When I dreamed up this album I set out to make music in the vein of their 80..sound”, says Pelle. Wow, that brave guy made it: “Time Elevation” is the best Def Leppard album since “Hysteria” of 1987. Big words, but Grand Design got the songs to prove it. “I missed that sound and those songs. I couldn’t find any band that matched that and then I decided to give it a shot. I..m not denying that I tried to copy that sound and vibe. Damn it: those guys are my heroes”, says Pelle Saether. “I’m proud of where I come from musically, and if you want to pin me down as a copycat, fine. I don..t care, this is the music of my heart and soul”, says Pelle Saether…”