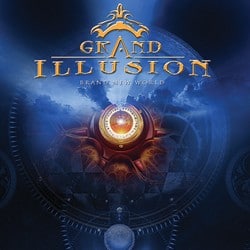 The new Grand Illusion album ‘Brand New World’ will be released 19th of May in Japan and 21st of May in Europe through AOR Heaven (www.aorheaven.com).

After a four and a half year absence GRAND ILLUSION have decided to reunite and the boys also have a new album with the title, “Brand New World”, in the pipeline. The band core of Anders Rydholm, Peter Sundell and Per Svensson are intact and guests on their new album are Gregg Bissonette, Tim Pierce, Danny Jacobs, Roger Ljunggren and Kjell Klaesson.

“In 2005 we needed a break and to work with other people to develop as musicians. The core of GRAND ILLUSION started in 1986 (under the name Promotion). A lot of things has happened during the four years since the break up but now we all felt that it was time to get back together, have fun and make some great music. We have never before worked so hard on any album. Just having legends like Gregg on drums and Tim and Danny on guitar solos feels like magic. The band formula with strong melodies and over the top vocals are the same”, says Rydholm.

In April 2009 Rydholm flew to Los Angeles to record drums with Gregg Bissonette in WoodCliff Studios, Sherman Oaks. During two intense days Rydholm, Bissonette and engineer Frank Rosato recorded the drums and the foundation for the new Grand Illusion record. In the lunch on the second day both were talking about favourite guitar players and one thing led to another and before the lunch had ended, Tim Pierce was booked for a guitar session two days later. Mike Slamer is another guitar legend that guests on this new album. Roger Ljunggren played the majority of the solos on “View From The Top” and we are very pleased that he once again helps us out with a couple of solos.

The band is also very proud to be back on the label where everything started. Georg Siegl and AOR Heaven helped us release our first album (PROMOTION – “Not for sale”) back in 1997 and now look forward to join the Metal Heaven team.