Grayson Manor ‘Return To The Manor’ On New EP 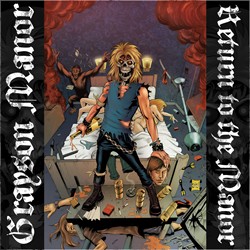 Atlanta based hard rock band Grayson Manor is back with a new three song EP titled ‘Return To The Manor’.

The project was produced, engineered, and mixed in Lawrenceville, Georgia at Black Paw Studios by its frontman, Brad Cox. It is currently available on iTunes and Amazon MP3 and will be on Spotify and other digital music services soon. Deatails on ordering the EP cna be found at www.graysonmanormusic.com.

The music was inspired when Brad and longtime guitarist Pat Valley began writing some songs just to see where it would take them. As the direction and songs started to take shape, drummer Rodney Beaubouef (ex-Stuck Mojo, Dangerous New Machine) was called into the studio to lay down some tracks. After a few days of recording everyone agreed that Grayson Manor was back with a passion. With the mixes completed, Brad knew the project deserved some old-school-inspired artwork to complete the package. Pro skater and artist Don Hillsman II (DC Comics, Marvel Comics, Dark Horse Comics) was brought in to deliver the goods.

The EP is the first new material released by the band since ‘Children Of The Manor’, which debuted in Europe on Bad Reputation Records. The band has toured extensively with many acts including Josh Todd (Buckcherry), Dokken, Winger, Saliva and was named one of the top SXSW bands to keep an eye on.

With the release of ‘Return To The Manor’ Brad and Pat have already begun working on more material and are putting together a tour for 2014.