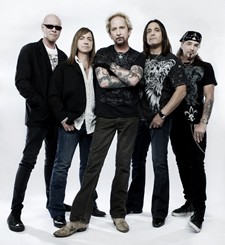 Great White and former frontman Jack Russell have announced that they have entered into an agreement settling their pending litigation over the ‘Great White’ name.

In March, 2012, co-founding member and original Great White singer Jack Russell sued his former bandmates, Mark Kendall, Michael Lardie and Audie Desbrow, over their continuing use of ‘Great White’ after Russell had taken a leave of absence from the band for medical reasons. The band countersued that April, accusing Russell of lip-syncing on tour and becoming dependent on painkiller, sand the parties have been involved in contentious litigation for the last year.

After three days of closed-door mediation before U.S. Magistrate Judge Carla Woehrle, the parties reached a comprehensive agreement. While many of the terms of the agreement will remain confidential, it can be revealed that, going forward, the current Great White band will continue to use the name ‘Great White’ and Russell will perform under the name ‘Jack Russell’s Great White’.

Russell was hospitalized in the summer of 2010 after suffering a perforated bowel, and he was ultimately forced to sit out the remaining dates on Great White’s 25th anniversary tour while recovering. Warrant’s Jani Lane was recruited to front the band for select shows before XYZ star Terry Ilous was called in to take his place and eventually became a full-time member, appearing on the group’s 2012 album ‘Elation’.