Great White drummer Audie Desbrow was recently interviewed by ListenIowa and provided some reasons why singer Terry Ilous was let go from the band last month and replaced with Mitch Malloy. 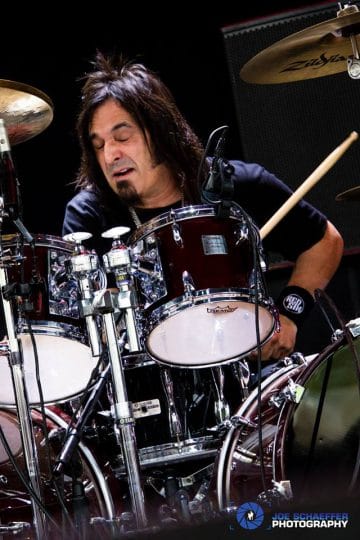 Desbrow stated (with slight edits): “Some things don’t work out business-wise, so we had to part ways with Terry… There were differences of opinions, personality clashes. Certain things just don’t work out after time and you just have to move on. It’s one of those things that sadly has to happen in the music world. I actually got along with Terry well. He’s a great singer. But Mitch is great, too, and we look forward to working with him.”

Desbrow continued: “The fans are very used to hearing Jack Russell‘s voice in Great White. It’s very identifiable. With Terry, we could have gotten a Jack clone, but we didn’t. Terry fit the criteria of the music direction that we were going in very well. But some people thought we were actually trying to pass him off as Jack, which wasn’t our intention at all. It’s really hard after someone plays in the band for so long. You try to do the best interpretation of the phrasing of Great White. After a while, when you start to add your own style to it, it starts to stray away from what people want to hear.”

In terms of the fans accepting Ilous fronting Great White, Desbrow opined (with slight edits): “It was about half and half with the fans. Every time I’d post (on social media) something about the band, it would be that way. Half the fans wouldn’t accept this band as Great White. You’ve gotta stay true to what people are familiar with…. You can’t turn these songs into reggae or jazz songs. (laughs) I’m sure Terry will have no problem finding work. The whole time he was in the band he was getting offers from everyone from George Lynch to Dio Disciples and different people who were like, ‘Hey, we’d love to have you if you ever leave Great White.'”

You can read the rest of the interview at ListenIowa.