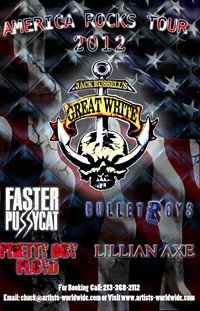 Five of the biggest classic ’80s rock bands unite for the must-see ‘America Rocks Tour’. Although it’s still early in the year, one of 2012’s must-see tours for the U.S. headbangers has already been announced. The ‘America Rocks Tour’ will consist of kick-ass sets, headlined by Jack Russell’s Great White and featuring Faster Pussycat, the BulletBoys, Pretty Boy Floyd and Lillian Axe.

All five acts remain popular with fans of ’80s metal, and together have sold millions of records worldwide. Countless renowned anthemic metal anthems and power ballads will be on display each night, resulting in a fantastic live concert attraction.

Jack Russell’s Great White went from metal/hard rock to mainstream radio airplay with their breakthrough smash “Once Bitten Twice Shy” and haven’t looked back, as they celebrate 30 years of the band’s history by performing all their hits. In December 2011, after a full recovery from his health problems, Jack Russell informed his former bandmates that he was taking the name Great White, which he created, and moving on — ownership of the name has yet to be determined in a court of law. Thus, to avoid confusion, Russell’s group is going by the name Jack Russell’s Great White and consists of guitarists Robby Lochner and Matthew Johnson, bassist Dario Seixas and drummer Derrick Pontier.

Hollywood’s Faster Pussycat bring their notorious live show back to North American stages, and they promise to go deep into their extensive catalog that includes “House Of Pain” and “Poison Ivy”.

The BulletBoys perform their numberous smash hits such as “Smooth Up In Ya” and “For The Love Of Money” off their platinum selling self-titled debut, which dominated both MTV and radio airwaves, and remain relevant to this day thanks to heavy rotation on VH1’s Metal Mania, Sirious/XM’s Hair Nation and internet radio throughout the world.

Pretty Boy Floyd took the Sunset Strip by storm in hair metal’s heyday and continue to have a die hard following to this day. Their classic album ‘Leather Boys With Electric Toys’ will be represented as well as other surprises.

Louisiana music Hall Of Fame members Lillian Axe have proven their success with over a million albums sold worldwide and will be promoting their recent release ‘XI: The Days Before Tomorrow’. Lillian Axe is known for their thought-provoking lyrics with their melodic song structure and the musical chops to back it all up.