Great White founder and lead guitarist Mark Kendall was recently interviewed by Mick Michaels for The Cosmick View. Back in July 2018, Great White announced that they were replacing their lead singer Terry Ilous with Mitch Malloy. 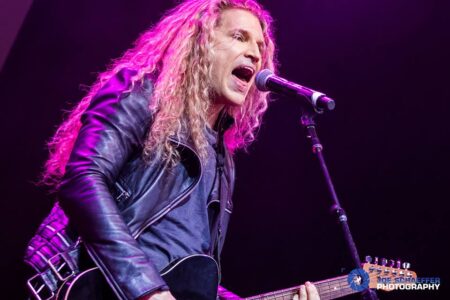 In terms of how Malloy has or will impact Great White‘s songwriting, Kendall indicated (with slight edits): “The fans have accepted Mitch with open arms. He has great song sense, is an excellent live performer, and sounds great with our current and past music. We never change anything about our writing process or try to change our music for any reason.”

With respect to how Malloy might impact the band, Kendall stated: “It’s a new welcomed chapter in our career! The past had great moments also, but we are living in the current one, and digging it. I think people will like our new music with Mitch!”

When asked to compare Great White‘s current line-up with the one from the late ’80s (which included singer Jack Russell), Kendall opined: “It’s basically the same line-up apart from the singer. If you add the three of us [drummer] Audie [Desbrow], [guitarist / keyboardist] Michael [Lardie] and I, it’s over 100 years in the band and 14 studio albums. Nothing else is too drastically different apart from no music stores and people mostly download songs and not the whole album. I believe the human connection with fans and band gets a little disjointed for that reason. However, when I say that, I have to add, our fans have been loyal from day one and still attend our live shows and buy our records.”

You can read the rest of the interview with Mark Kendall at The Cosmick View‘s website.