Great White lead vocalist Mitch Malloy has seemingly released a video out of the blue for the single “My Therapy” from his new band Malloy. 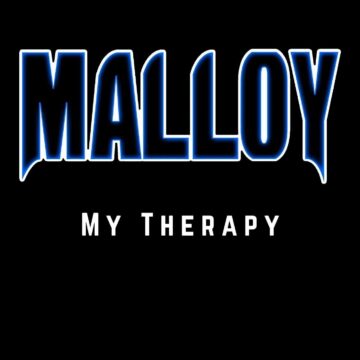 Malloy consists of Mitch Malloy on lead vocals, Bret Carlisle on rhythm guitar, Jacob Mann on lead guitar, Skylar McCain on drums and Ian Smith on bass. Of note, all of the musicians except for Mitch Malloy also play in the band All Or Nothing.

“Mitch Malloy is the lead singer for the iconic rock band Great White. As a singer, song writer, producer, and solo artist, Mitch’s desire to create and perform never subsides. To fill the void of the “Off the Road Lifestyle”, Mitch began writing and recording feverishly. After performing a local show for his friends and members of the community, Mitch received an overwhelming amount of support and enthusiasm. This response inspired Mitch to create a band that would showcase his music, style, and talent. Malloy was formed.

Mitch shares stories that include his first record deal with RCA/BMG Worldwide and how he recorded two major-label charting albums. Hear firsthand about his surreal experience on the Tonight Show with Jay Leno. Learn about the call from Eddie Van Halen to audition for and subsequently join Van Halen and ultimately become remembered as Mitch Malloy, Van Halen’s Lost Boy by Van Halen fans worldwide. The stories go on and on and include Mitch entertaining the idea to join Journey while writing with Jonathan Cain, turning down Chicago, to being chosen as the lead singer of Great White.

New music by Malloy comes naturally to Mitch as he is an award-winning songwriter who has written with top hit-makers like Desmond Child, Jim Weatherly, Dennis Morgan, Mike Reid, Victoria Shaw, and Gary Burr.

Mitch will continue to play clubs, concert halls, theaters, and private shows as Malloy during time off from Great White.”