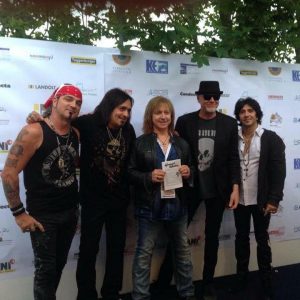 The following are excerpts from the Blabbermouth article in that regard (with slight edits):

Great White will enter WireWorld Studio in Mount Juliet, Tennessee, just outside of Nashville, in January 2017 to begin recording its new full-length album. Helming the sessions will be legendary rock producer Michael Wagener, who previously worked with Great White on the “Out Of The Night” EP (1983) and the band’s 1984 self-titled album.

Prior to the sessions for the new album, Great White will release professionally filmed video footage of their May 2015 performance in Las Vegas, Nevada as part of the “Metal Meltdown” concert series. Due later in the year, the special concert was produced by the award-winning production company Rock Fuel Media and the retail package will include both Blu-ray and DVD formats as well as an audio CD. Great White guitarist Mark Kendall told RockBandReviews.com about the set: “They had forty cameras at this show. It’s gonna be a DVD concert series that’s also gonna be on a cable network, which I don’t know which network. And it’s gonna be with… Twisted Sister was in there, Extreme, Skid Row… And I think they’re releasing Twisted Sister first and then us.”

According to Kendall, the DVD and Blu-ray will include a Great White documentary where he and his bandmates “got to back and tell our entire story. They followed us around with cameras for probably two months. You know, we really got to give details of our entire… from the ground up to now. And I think it’ll be great for the fans, ’cause us being fans, I know I like to see behind the scenes from all my heroes. So I think it’ll be fun for the fans to kind of go behind the stage, if you will, and kind of see where we came from and how everything unfolded.”