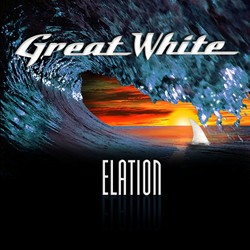 Great White To Release ‘Elation’ On May 18th

Great White will be releasing ‘Elation’ on May 18th through Frontiers Records, the band’s first recording with former XYZ vocalist Terry Ilous at the helm.

Great White guitarist Mark Kendall states, “First of all this will be our very first studio album with our new singer Terry Ilous, The new release will include 12 new original songs. Secondly it will be released in all of Europe, Japan and USA the same day, May 18th 2012. All the promotion for the album begins on April 18th. This is just a brief pre-announcement. Also we will be recording a live album at the Key Club on March 22nd for a future release. I would imagine the release date for the live album will announced later in the year. We will also be filming the show for a DVD that will also become available at a future date, to be announced. We are extremely excited about our new studio album and are looking forward to sharing our new music with you all.”

Great White — consisting of Mark Kendall (guitar), Michael Lardie (keyboards/guitar), Scott Snyder (bass), Audie Desbrow (drums) and Terry Illous (vocals) — will be performing their 30th Anniversary show on March 22nd at the Key Club in Hollywood, California. Tickets for the event can be pruchased at www.keyclub.com.

Meanwhile, orginal Great White frontman Jack Russell debuted his new band — Great White Featuring Jack Russell — on January 14th in Redondo Beach, California. In Decemeber, 2011, Russell heralded his return by saying, “I am feeling better than ever, despite any rumors you may hear to the contrary. Unfortunately, and as confusing as it will be, my former bandmates and their manager have decided to continue to tour next year under the name I created, Great White. I will be touring under the name Great White featuring Jack Russell, to try avoid any confusion. So now the true fans will know the difference.”

His former bandmates quickly shot back with, “Since Jack’s departure in August 2010, Great White has performed almost 100 concerts. We’ve had no shortened sets, cancellations or song choice limitations due to vocal issues. In this struggling economy, fans need and deserve more — not less. We owe it to our fans and the promoters to not to allow Jack Russell and some garage band to hurt Great White’s classic rock legacy and bright future. Jack Russell does not have the right to start his own Great White or use the name without our names in the lineup. We will litigate any promoter that books ‘Jack Russell’s Great White’ or uses any logo featuring the name Great White.”

Jack Russell countered by retaining the services of The Law Offices of Michael Kelly to protect his rights to make his living and play under the band’s name that he founded in 1978. Mr. Kelly has represented high profile rock stars in disputes for more than 35 years.