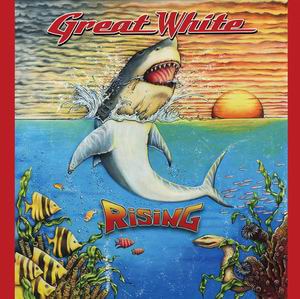 Since reuniting in January 2007 to perform at a benefit concert, GREAT WHITE has moved forward releasing their comeback album “Back to the Rhythm” to commemorate their 25th anniversary. Hailed by critics and fans as a return to the heydays of the band, GREAT WHITE performed live on a world tour that ended in early 2008, after a successful string of 14 dates all over Europe.

Long time members Jack Russell (vocals), Mark Kendall (lead guitar), Audie Desbrow (drums), Michael Lardie (guitar, keyboards) with new bassist Scott Snyder (ex RAMOS) have spent the last few months in the studio writing and recording new songs. “I think had we done this record back in the day it would hold up to anything we’ve ever done and also fit perfectly” says guitar player Mark Kendall “When we make music with Jack singing and me playing guitar along with Michael Lardie, it’s going to sound like Great White no matter what era”.

“The new album for me was extension of the affection we have for playing music together” says Michael Lardie, “I believe the songs are a bit more introspective true to life experience for us, not all the songs were written as we went into the studio, so I feel there is a freshness to the tracks as a result”

According to singer Jack Russell, “The band is in great shape and everyone is excited about the new year. We can’t wait to tour and play some of the new music live. Our new bass player Scott is a great guy who can really play. The stuff he wrote to our new music is awesome!”

Just like the previous album, “Rising”, was mixed, produced, and engineered by Michael Lardie. The new cd rocks from start to finish and shows the band’s maturity in writing amazing Rock anthems, killer Blues numbers, melodic mid-tempos and heartfelt ballads.

“Rising” tracklisting includes:
Situation
All Or Nothin’
I Don’t Mind
Shine
Loveless
Is It Enough
Last Chance
Danger Zone
Down On The Level
Only You Can Do
My Sanctuary
Let’s Spend the Night Together (European bonus track).