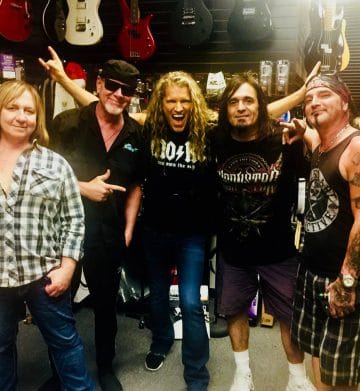 Kendall stated (as indicated by Blabbermouth): “We just felt it would be a good idea for us to do a proper video and record a show with something other than a cellphone to kind of introduce Mitch,” he explained. “And our [booking] agent will use it for this and that, and we’ll just throw it out there free — it’s nothing we’re gonna really put together to sell or anything; we just want people to see it properly and hear how it sounds at the show. Because when you hear a cellphone [recording], the guy [filming] might be over by the bass player’s side and it might distort a little bit. So it really isn’t a great representation, although we welcome the cellphones — I don’t care if everybody holds ’em up and records us — but it’s not really a great representation of what happened that night.”

In terms of whether Great White thought of calling former singer Jack Russell once it became clear that Terry Ilous would no longer be in the group, Kendall advised: “Not really. I know everybody would like all the original members to be together in all the bands, and sometimes, it’s just not doable. I don’t know… Addiction plays a role. I work with addicts and alcoholics on a daily basis, and it’s tough. Jack‘s able to go out there and sing and everything, and we’re happy for him. But we’ve kind of just moved on, and we wanna enjoy ourselves in the twilight of our career, if you will, and just have fun and just rock our hearts out. And we do it healthy, happy, loving, giving, caring…”

Interview with Mark Kendall by Ron Keel for KBACK Radio: