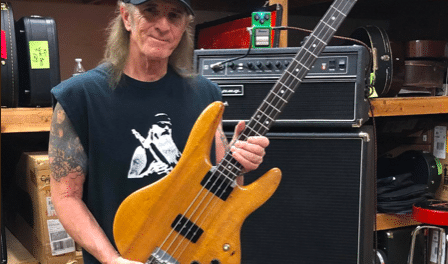 Chaisson auditioned for the bassist position in Ozzy Osbourne‘s solo band that eventually went to Phil Soussan in 1985. DiCecco asked Chaisson about his recollection of his audition and meeting guitarist Jake E. Lee for the first time. Chaisson went on to play in Badlands and Red Dragon Cartel with Lee. 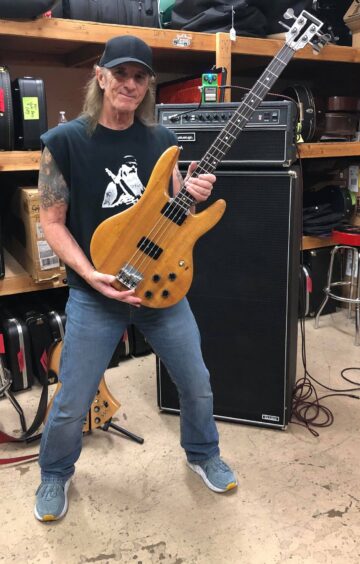 I thought that he was probably the best guitar player I had ever seen; a combination of licks, stage presence, tone, just everything. I was very impressed with him. One of the reasons I agreed to audition for Ozzy was because Jake was in Ozzy, and I thought, “I’d really like to meet this guy, and jam with him, and maybe someday in the future, we could be in a band together.” Total pipe dream, I guess. So, when Sharon [Osbourne] called me and asked me to come and audition for Ozzy, I thought the audition was in L.A., but they were in Inverness, Scotland. So, they flew me to England and then flew me up to Scotland. Ozzy didn’t show up for about a week; he and Sharon had gotten into some fight, and she hit him in the face with a frying pan.

We were just kind of up at this Scottish manor up in Inverness. Jake’s a night owl, so he would sleep all day and then get up late in the afternoon, and then me, him, and Randy Castillo would just go in the studio and jam. Just whatever riffs Jake came up with, or I came up with. Jake’s really into jamming, so we kind of developed a friendship based on the way his musical acumen is similar to mine — I’m really into jamming. Even in Atomic Kings, Ryan [McKay], and I do a lot of jamming, just working on different riffs that maybe don’t even turn into anything. So, it’s a big part of what I enjoy. That was kind of the first bonding part of Jake and I’s friendship. Then we had a lot of other similarities. I always say that we’re like opposite sides of the same coin; everything he is, I’m not, and vice versa. And we’ve been friends for almost 40 years, and we’re still friends now.

The reason I wanted the Ozzy gig was, yeah, it would be Ozzy, and I would be on a big tour, and all that crap, but Ozzy is notorious for being shitty to his bass players. And I was thinking, “Boy, I don’t know if I have the temperament to have some guy–” because he yelled at me one night — he was drunk, and he started giving me a hard time about my bass tone. And I was actually fiddling with my amp and Jake was kind of facing his Marshall, and he was looking at me, and I was kind of glancing over at him, and he was shaking his head no like, “Don’t kill him.” I was thinking, “I could knock Ozzy out right here, but how am I gonna get back from Inverness back to London?” ‘Cause I had a plane ticket from London back to the States, but I didn’t have one from Inverness. At the time, I didn’t have any money, so I couldn’t call up anyone and say, “Quick, send me $500. I need a plane ticket from Inverness, Scotland down to London.” I’d have been screwed, so I had to take a lot of Ozzy’s abuse. He didn’t find me particularly funny; he didn’t even want me to audition.

When he first met me, he didn’t think I had the right look for MTV, and I probably didn’t. He wanted to send me home without even auditioning me. Jake said, “We just spent a bunch of money shipping him over here. He’s the best bass player that’s been here, give him a listen.” Ozzy said, “Fine. Let him play one song, and then go home!” I was like, “Hey dude, you know I’m standing right here, right?” So, I ended up staying for 21 days and whenever Ozzy got Phil Soussan to be the bass player — and part of it was on the strength of “Shot in the Dark” — but when Phil would piss Ozzy off, Jake would tell me that Ozzy would always say, “We should have kept the ugly guy!”

From that, Jake and I maintained a friendship. I didn’t get the gig, obviously, but [Jake’s] actually the one that called me, and said I wasn’t getting it, but I knew I wasn’t anyway. He would call me from the road, and when he’d be in town in L.A., he would call me up, and he would come over for dinner at my house sometimes or we’d go out to dinner. He had a couple of hot rods, so I’d go over to his house, and we’d tinker on them. We would have been friends whether we were musicians or not.”