Former Badlands and current Kings of Dust bassist Greg Chaisson apparently faced a fork on the road back in 1975 when he decided not to pursue a career as a policeman and focus on his music career instead. He obviously made the right choice since he was part of one of the most revered but short lived bands from the late ’80s / early ’90s (Badlands) and continues to release some great music to this day with his current band Kings of Dust. 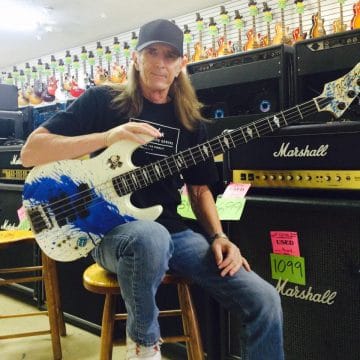 In 1975 I applied to the Phoenix police academy and was accepted   . I passed all of the tests and was ready to enter the police academy, at the last moment I changed my mind because I didn’t think I could still have my music career and be a policeman at the same time.  I have no regrets, however I have always strongly supported police everywhere. It has to be one the hardest jobs in existence !

I know there are a few bad cops out there but the good ones far far outweigh the bad. That’s the way it is in every walk of life.  If you want to see what society would be like without the police just take a look at what’s going on right now.  Blue Lives Matter , All Lives Matter… if you can’t see that then you are part of the problem and not part of the solution. If you support the rioting and looting and the disrespect and mistreatment of the police or anyone for that matter please unfriend me now!

Badlands‘ “Dreams In The Dark” video: