Very bad news concerning Grim Reaper‘s frontman Steve Grimmett as the singer is apparently very ill and having a good portion of one of his legs removed due to an infection from his foot and bones. The singer was rushed to hospital immediately after his band Steve Grimmett’s Grim Reaper‘s show at Piedrahits & Pedro Moncayo in Guayaquil, Ecuador on Saturday, January 14, 2017.

The following message was posted by Grimmett‘s wife Millie via the Facebook page of Steve Grimmett’s Grim Reaper about 16 hours ago:

“Hi everyone. This is Steve‘s wife at Reaper HQ. As many of you know steve was taken Ill at Saturday nights gig and he sung most of it sitting down. After the show Steve was taken to hospital where he had an operation to remove an infection from his foot and bones. He is still in hospital in Guayaquil but this is all I know right now. Once I have more information I will let you know. Thank you for all your support and kind words. It means a lot. Millie Grimmett“

About an hour ago, Grimmett‘s wife Millie posted an update via the Facebook page of Steve Grimmett’s Grim Reaper: 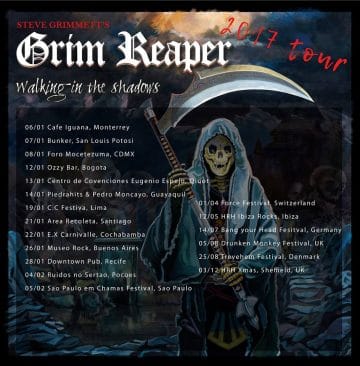 unfortunately the operation didn’t work and steve is currently in the operating theatre having limbs removed. We don’t know how much of the leg will need to be removed but Steve is very very ill. He has an aggressive infection that spread very quickly over night.

I am sorry to say the rest of the tour has been cancelled. I am hoping to fly out myself soon and stay with steve until he is ready to come home so I may meet some of you then.

But don’t worry, the voice WILL be back.

Back on September 23, 2016, Grim Reaper‘s frontman Steve Grimmett released a new studio album entitled Walking In The Shadows via his own new version of the band called Steve Grimmett’s Grim Reaper.

Steve Grimmett’s Grim Reaper – “Walking in the Shadows” [Official Video]From the album ‘Walking In The Shadows’, out now on Dissonance Productions.CD digi: h…